By Catherine of VegCharlotte • February 5, 2013

This is one category that received A LOT of votes!

So many, in fact, that I had to choose three winners – or rather, give three awards to two winners … You’ll see what I mean!

Bean Vegan Cuisine won for Best Veggie Burgers overall.  I wasn’t surprised –  they have not just one, not just two, but four different veggie burgers on their regular menu, plus a “Build Your Own Burger.”  Let’s see, there’s the Good Burger – two non-beef patties, special sauce, lettuce, “cheese”, pickles, onions … a Jalapeno Cheddar Burger with fried jalapeno chips … an Old Fashioned Cheeseburger with chili, slaw, mustard, and onions … a Bacon Cheeseburger with seitan bacon and your choice of Daiya cheese.  Chef Charlie (who is nothing if not creative and 100% committed to the vegan lifestyle) also sometimes offers other  hamburgers as one of Bean’s Daily Specials … Black and Blue Burger, Hollywood Burger, Queso Burger, Mushroom Burger … Or, with their BYOB (Build Your Own Burger) option you can truly “have it your way” at Bean Cuisine … 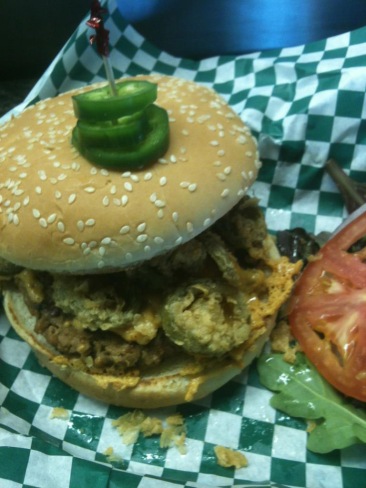 All Bean Burgers are $9.50, which includes a choice of side from their quite extensive side item list.

Since Bean enjoys a bit of an advantage in this category by offering such a huge variety of burgers, I decided to level the playing field a little by counting which SPECIFIC burger(s) received the most votes.

What can I say but vegans in Charlotte, NC  like it HOT!!

It was virtually a dead heat between Bean’s Jalapeno Cheddar Burger (my personal favorite, although I was not voting) and Luna’s Living Kitchen’s Fire & Brimstone Burger (a “quinoa-kamat based patty spiced with chipotle sunflower hummus, onion, cucumber, salsa verde, and house hot sauce“.)

What did voters have to say about the Fire & Brimstone Burger?  “Perfect combination of flavors and spices.”  “Luna’s hot sauce would make ANYTHING taste good … I am addicted,” and “Sounds weird, but try it in a kale/spinach leaf wrap.” 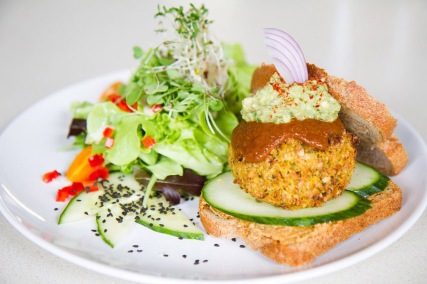 All burgers from Bean Vegan Cuisine and Luna’s Living Kitchen are 100% Vegan.

But there are LOTS of other veggie burgers out there that VegCharlotte voters  like .. so let’s check them out!

Please keep in mind, though, that although most voters are vegan or vegan-ish, a few are vegetarian.

Also, veggie burgers are notoriously difficult to categorize.  You can always make a veggie burger “vegan-ish” by leaving off condiments like cheese, honey mustard, sour cream, mayo, and mayo-based slaw … BUT it is so hard to tell (by tasting) whether a veggie burger patty might have a little dairy or, more commonly, egg as a binder!

Additionally, many servers and managers get the terms “vegetarian” and “vegan” confused … so if you are on the stricter vegan side, proceed carefully!  When I write a full review I do try to determine what is truly vegan and what is vegetarian, but I don’t have the resources to investigate every award nomination.  I have sent emails to all restaurants whose burgers were nominated and I will update this post as appropriate.  If anyone has additional information, please share!

So here are the rest of the nominations, in alphabetical order:

131 Main – Notable for the fact they use beets in their burger, which gives the inside of the burger a red tint that “can give one the unsettling impression you have bitten into a burger of medium rare cow flesh.”  It also has a unique sweet soy glaze beloved by several voters.   $13.

Boudreaux’ Louisiana Kitchen – Veggie Burger, described on their menu as “black beans and curried garden vegetables grilled in a savory patty and served on a toasted Kaiser roll with cucumbers, tomato, red onions and citrus aioli – 6.95.”   I haven’t tried this one, but it’s got to be better than their “Gator Bites” – flash fried alligator tail – which I ate on a dare almost 20 years ago and which, incidentally, tasted nothing like chicken.

The Diamond – Black Bean Veggie Burger, $6.95.  Interestingly, all of the voters for this were unsure whether it was vegetarian or vegan.  The Diamond’s menu has vegetarian items clearly marked, but the servers seem to have some trouble discerning vegetarian from vegan.  The burger texture is falling apart and seems almost like it may have some falafel in the mix, so a lot of us have our fingers crossed.  If you have more info, please share!

Dish – Veggie Burger – Chickpea-based.  Notable for the extremely wide assortment of toppings you can add. $7.95.

Fern’s Om Burger ($11)  Smoked Tomato, Spicy Pickled Local Cucumbers, Poblano Garlic Aioli, Choice of Whole Grain Bun or Kale Wrap, Vegan Cheddar or Mozzarella + $1.  I could have sworn this burger was originally vegan but the online menu doesn’t have the “fern fronds” signifying vegan.  I don’t know if it’s a misprint or if new chef Drew changed the original recipe.  UPDATE 2/12/2013 – Lou Bohland has confirmed this burger is indeed vegan.  YAY since it’s one of my favorite things at Fern!  Lou further clarifies,  “It’s a white bean and hemp seed base. Also, has carrots, mushrooms, tofu with a vegan aioli and Duke’s Bakery fresh sourdough wheat bun, or kale wrap.”

Stars Burgers – Veggie Burger – Notable for being the least expensive veggie burger, only $3.95.

Sir Edmund Halley’s received a couple of nominations for their Vegan Burger, made of quinoa with a really awesome tomato compote topping – but I checked their online menu and they appear to no longer offer it! Boo.

« Restaurant Review – Thai Taste
Behind The Scenes At A Circus Protest »