A Perfect Cup of Vegan Chai 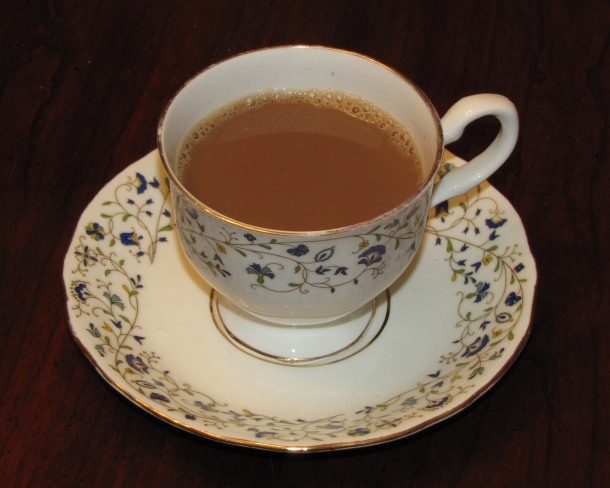 When my partner decided to go vegan, giving up chai was his biggest hurdle.

Amrik is a boy who loves his chai.  Very early in our relationship, he taught me how to make the spiced, milky tea.  I honestly believe that if I hadn’t been an apt pupil, he would have shown me the door, teacup in hand.

It wasn’t unusual for us to make two or even three pots of chai a day.

Neither of us expected chai to be a stumbling block on the path to veganism.  The prevalent advice out there is, “Just replace the milk with soy, rice, or almond milk!”  Simple, right?

Our first attempts were with soy milk.  We quickly found that most soy milks – especially refrigerated soy milks, like Silk, 8th Continent, Harris Teeter or Whole Foods store brand  – take on an unpleasant, sharp taste when heated in tea.  Perhaps it’s the heat, perhaps it’s the tannins in the tea.

“Sweet Mother of Pearl,” I spluttered upon tasting that first cup of vegan chai.

Even our dog Scruffy wouldn’t touch it.

Next, we tried rice milk, which has a much milder taste and seems to withstand heat better.  However, rice milk has a very thin texture.

“I may as well be drinking water,” Amrik pouted.

Almond milk (especially Almond Breeze) was actually quite tasty but it changed the flavor of the chai completely.

“Coconut milk?” I suggested in desperation.

“Don’t even think about it.”

So for weeks Amrik mourned his beloved chai.  But I was determined.  I had recently figured out how to make homemade vegan yogurt and I was feeling invincible.  I continued to experiment and made the following discoveries:

Here’s my recipe for the perfect vegan cup of chai:

Keep in mind chai is an art, not an exact science.  Experiment and adjust to suit your own personal taste.  Amrik likes his chai very milky; I like mine a little less so.  Sugar really brings out the spices, so I do recommend using sugar instead of an artificial sweetener.  But for variety you can try jaggery, an Indian unrefined sugar that’s similar to brown sugar.  Sometimes, if I’m making chai just for myself, I’ll add a small piece of cinnamon stick.

One last piece of advice – chai means tea, so please refer to this drink as chai or masala chai (spice tea).  Saying, “Chai Tea,” is the same as saying “Tea Tea.”  It’s incredibly annoying to some people – especially before their first morning cup  of chai!