Featuring ways to live vegan AND save money by:

We’ll start with a series of posts on coupon basics.

I mean, I like skydiving but this is just a wee bit more exciting.

Plus, couponing doesn’t irritate my sinuses the same way skydiving does. 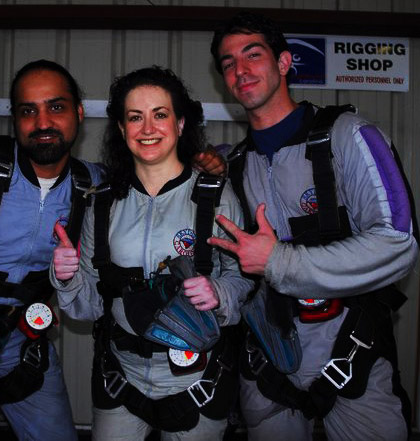 Which is more exciting … skydiving with two handsome men, or getting your groceries just for sales tax? Hmmmm … close call!

There appear to be two reasons vegans don’t coupon:

(Note: I am talking about a can of crushed tomatoes, not a crushed can of tomatoes.)

Others will not buy the tomatoes because the company also makes products that are not vegan – say, a line of soups that may have dairy or chicken broth.  Or maybe all the products that company makes are vegan, but they’ve been bought out by a company which isn’t.  Or maybe those tomatoes were grown in what used to be a rainforest, but they cut the forest down and killed all the orangutans and now use child slave labor to pick the tomatoes.  Or …

You get my drift.  And if you are that ethical, I salute you.  I used to be that ethical myself, once. When I was a fresh new enthusiastic young veg*n and had time and money to burn.  And believe me, it takes quite a bit of time and money if you choose the most vegan, environmentally correct product all the time!

Let’s face it … if you are even thinking about couponing it must be because you could use a little extra cash.  You probably have obligations – a mortgage, kids.  You may have some debt to pay off.  You may be unemployed or underemployed.  You or your spouse may have decided to live on one paycheck so one of you can stay home with the kids.

So I say, give yourself a break from the quest of being a “perfect vegan.”

As long as what you buy is meat, egg, and milk free – that’s enough!  You are eating vegan and that is just so HUGE!  Go ahead, take that coupon to Harris Teeter, tell ’em to double it, grab that can of tomatoes, waggle your fingers in your ears at the vegan police and don’t worry about saving the whole world!

Many top animal advocates advise using your resources (time and money) where they will be most effective.  That may mean saving your time and money so you can use those assets better elsewhere.

A personal story:  My partner and I were both laid off from our jobs within six months of each other.  One of our survival strategies was to coupon like crazy.

(I’m good, but he is a black-belt couponing ninja.  There would often be a hushed silence in our wake as we exited after one of our couponing escapades.)

We may not have always purchased products from the most ethical of companies.  I mean,  yeah, we bought Paul Newman salsa for a dime even though the Paul Newman brand also sells cheese pizzas.

But … EVERYTHING we purchased was meat, egg, and dairy-free!  And since our grocery bills were very, very low, with the money we saved, we were able to:

BTW, through couponing we were also able to feed our furry children high quality pet food and provide an abundance of treats.  In fact, most of our cat treats we got for free through double and triple coupons at Harris Teeter.

I know some vegans will disagree with me and that’s fine.  You may not want to read my blog on Fridays.

But for those of you who are still with me … next week we will discuss “coupons don’t offer savings on anything I want to buy.”

You will be pleasantly surprised.