Bombay Grille Cuisine of India is a delightful surprise for vegetarians and especially vegans, tucked away inside an aging shopping center that’s seen better days (Tower Place in Charlotte, NC).

From the outside, you may have your doubts … Bomba Cuisine of India, anyone?

Inside, however, it’s warm, clean, bright … with a few things going on that makes this a standout Indian restaurant for vegetarians and vegans …

There’s a large vegetarian appetizer and entree section of the menu. Plus a few other items if you comb through the menu carefully … such as Gobi (cauliflower) Manchurian and Vegetable Biryani.  This should be the norm for an Indian restaurant, but sometimes in America things get a little … Americanized.

About half of the vegetarian appetizers and entrees on the Bombay Grille menu are “naturally” vegan.

Gobhi Lassanwalla. Think of it as Indian cauliflower “wings.”

And even some of the entrees that are not “naturally” vegan, can be customized and cooked to be vegan!  Most notably, the palak (spinach dishes) – Channa Palak (chickpeas and spinach) and Aloo Palak (potatoes and spinach). 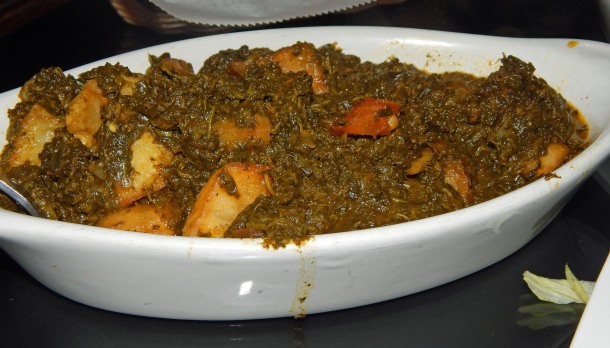 Aloo Palak, prepared to be vegan.

Extremely knowledgeable waiters.  Not sure what is vegan or could be vegan?  Just ask!  Every waiter I have dealt with there has known exactly what was in each dish.  Once I visited for the lunch buffet (certain I’d have to order off-menu).  The waiter walked me through every dish on the buffet, answering all my questions.  (And I did ask a lot of questions; besides the vegan thing, I’m interested in Indian cooking in general.)

Channa Masala, an Indian dish that is almost always vegan.

The food is North Indian style, and each dish has its own unique and distinct seasonings (unlike a few other Indian restaurants in Charlotte, where it seems the same masala is used for every entree).

Bombay Grille has very good Roti Bread.  As some of you may know, vegan Indian food tends to be “dry” (think Channa Masala), as opposed to a “wet” dish with a lot of “curry” or “gravy”.  Dry curries are best served with bread, not rice. Some Indian restaurants, catering to American diners who go crazy for dairy-containing naan, do not even serve breads beside naan. Rotis are reasonably priced at $1.95. 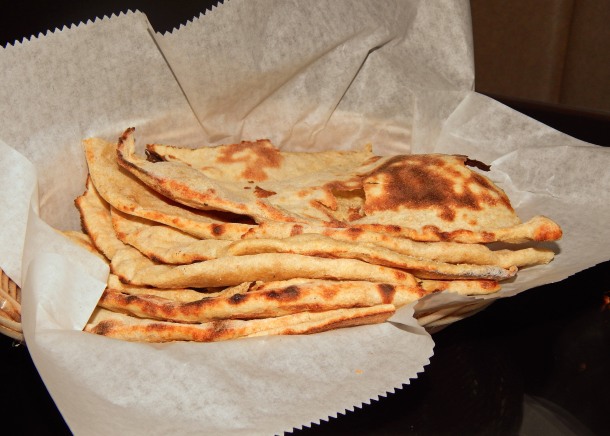 Roti. Order this instead of naan – naan almost always has milk.

Reasonable Prices.  A vegetarian/vegan dinner entree at Bombay Grille will run about $10.95 – $11.95.  You don’t have to place (and pay for) a separate order of rice – it’s included in your meal. They also include complementary pappadums – sort of a large, crispy wafer – served with chutneys and a kind of Indian ketchup.  Finally, unless you have a really huge appetite, you’ll have leftovers to take home for the next day.

Rice comes with the meal – you don’t have to pay extra . However, for most vegan dishes, like channa masala, you’ll want bread, not rice.

Caveats?  I can think of only one – the spice level can jump about a bit. You’ll order your food at a spice level of 1-5.  Last time I was there, I ordered a 4, my partner ordered a 3.  Mine was pleasantly spicy and hot but my partner was sweating bullets. I’d definitely recommend ordering on the mild side first.