Home › Living Vegan › I Am Not Vegetarian, I Am Not Plant Based; I AM VEGAN

I Am Not Vegetarian, I Am Not Plant Based; I AM VEGAN

There’s a certain thought process among many vegans and certain vegan groups that vegan is a bad word.

According to these vegans, we should all do the vegan lockstep and call ourselves vegetarians or “plant based” instead. Supposedly, the word “vegan” is threatening and intimidating. The words “vegetarian” and “plant based” are meant to give a warmer, fuzzier feeling to the omnivores we interact with.

First, I am not a vegetarian. By definition, vegetarians eat dairy and/or eggs. I eat neither. Why would I want to call myself something I am not? Not to mention the problems this would cause when dining away from home! Friends would make special quiches for me and order cheese pizzas. Waiters would proudly point out all the many vegetarian options on the menu – not a single one of which I would be able to eat.

Second, I do not believe the word “vegan” is threatening or intimidating to most people. Most of my friends, acquaintances, and co-workers do not have a problem with it. They go out of their way to make sure I have something to eat; they ask friendly and for the most part intelligent questions; they often ask to taste my food. They follow my blog and make my recipes. The only people who seem to have “problems” with the word vegan are those who like to chant “Bacon …. Baaacon” at me or make puppets out of their meat. You know the ones – the man who makes mooing noises as he eats his hamburger, or the woman who pokes her “lamb lollipop” towards my plate going “Baaaa. Baaaa.” And, you know what? I’m not interested in making those people feel more “comfortable.”

These rice and beans are vegetarian, but as a vegan I can’t eat them.

And, aah, that lovely phrase, “plant based.” Once upon a time, this was a beautiful way for vegans to describe themselves. I understand its popularity and its original intent – to define yourself by what you eat (plants) rather than what you don’t eat (animal products).

Unfortunately, times have changed and today “plant based” can mean almost anything.

I asked a sampling of vegan, vegetarian, and reducetarian friends what they thought “plant based” meant (or how they thought most people today interpreted the phrase). The majority agreed that plant based has become a synonym for flexitarian. Of those who thought it meant vegan, most thought it referred only to dietary vegans and not ethical vegans.

“It means pescaterian/flexitarian. Someone who eats a lot of plants but also chicken and fish.”

“I always assume that someone who follows a plant based diet is vegan, but vegan only for health reasons, not ethical ones.”

“Vegetarian, but not vegan.”

“It means the base of your diet is plants, but you can still eat other things.“

“I think most people take it to mean, ‘plants, plus whatever else I feel like eating today.'”

“It just means you eat more plants. You’re not actually trying to eat less meat, like a reducetarian.”

“It’s people trying to be trendy. They order from Nourish (Charlotte’s vegan meal delivery service) every week and then go out and eat a big ole steak on Saturday.”

“I’m a vegan for health and ethical reasons. I briefly labeled myself ‘plant based’ and attempted to order a ‘plant based’ meal in a restaurant. The manager suggested a chicken stir-fry.”

“People used to understand that ‘plant based’ meant vegan or vegetarian. The past several years I’ve had to clarify, ‘I am a plant based vegan.‘  Even I admit that sounds silly and redundant.”

“It’s vegans who only have other vegans for friends. ‘Cause no one outside the vegan loop is gonna know that plant based means vegan.“

If there was any hope of saving this phrase and returning it to its original intent, Dr. Oz torpedoed that chance in the June 2015 issue of his magazine, The Good Life. On the last page of the magazine, in the column Well + Good, he writes:

“Right now, the buzz is all about a “plant-based diet.” I’d like to see this one stick around, because it’s a smart way to eat. In fact, I’m determined to get you to try it.”

Whoa! I got really excited for a moment when I read that. But only for a moment. Because then … I continued reading.

Dr. Oz being Dr. Oz, this will probably become the accepted definition of “plant based” for most people and the mainstream media. A diet that is 20% animal products. 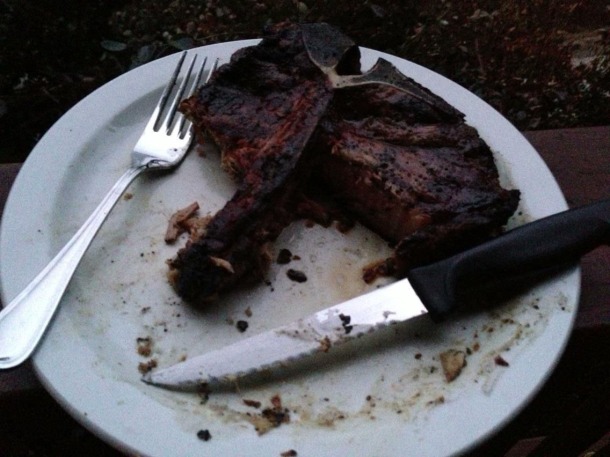 According to Dr. Oz, steak can be part of a plant based diet!

Please don’t misunderstand me! I’m not putting down people who are vegetarian or who follow a plant based diet – whatever that may mean to them. I think it’s awesome there are so many people eating more plants and eating less meat – and hopefully living healthier lives!

But I believe in clear and descriptive terms. It makes life easier for everyone – you, your family and friends, your MD, the restaurants you frequent.

If you’re an ovo-lacto vegetarian – great, people know exactly what that means. You don’t eat meat but do eat eggs and dairy. Pescaterian? No animal flesh except fish. Reducetarian? You’re an omnivore who is not ready to go vegetarian or vegan, but is actively trying to reduce animal products. Lactose intolerant? You can’t digest milk. Gluten free? You don’t eat wheat.

Someone who eats kosher has very specific dietary restrictions, as do persons who eat halal.

A person with a peanut allergy isn’t going to tiptoe around and refer to themselves as alternative nut based.

So why should vegans feel timidity about describing themselves as vegan – just for fear of offending a few omnivores or the Politically Correct Vegan Mafia?

Why should we describe ourselves as vegetarians (which we are not) – or use ambiguous terms like “plant based” (which, today, tends to imply we eat animal products)?

There’s nothing wrong with using a strong, clear, descriptive term to describe yourself. Everyone else does it. Trust me, most people won’t be offended. Most people will react with curiosity, not hostility.

Here’s the Merriam-Webster definition of vegan:

: a person who does not eat any food that comes from animals and who often also does not use animal products (such as leather)

The label fits, so I’m gonna wear it.

I am NOT vegetarian. I am NOT plant based.