By Catherine of VegCharlotte • September 2, 2018

Today’s prompt is, “Introduce Yourself” – so here goes!

I’m Catherine – a practical vegan living in Charlotte, North Carolina. I’m just your typical Irish lassie living in the American South with my partner from North India and three furry rescue babies.  So my food inspirations are a bit varied, to say the least.  One day I may make faux chicken salad and summer squash casserole for dinner. The next night, the menu may be rajma and raita. I also make a lot of fusion dishes – adding some Punjabi elements to Southern soul food. (Have you ever tried adding garam masala and hot chili peppers to mac and cheeze? It is da bomb!) And, of course, being of Irish ancestry I’ve never met a potato I didn’t like.

A shameful vegan secret about me:

I don’t like salad. (I know – isn’t salad supposed to be all vegans eat? I mean, when we’re not eating grass and cardboard.) To me, there is just something so incredibly boring about endlessly chewing raw leafy greens. I can only make myself eat salad once or twice a week – and even then, only if it’s loaded with “goodies” and a great dressing. So, I’ve had to find other ways to eat my greens. I am a bit obsessive about green smoothies. And I’m constantly experimenting with new ways to cook a pot of greens, or sneak greens into soups, stews, and dals. Expect to see some green smoothie recipes and other painless ways to eat more of the green stuff.

OK, THIS salad I like. But only once a week.

Another fact about me: I am one of those Pumpkin Spice girls. I am not, nor have I ever been, a summer person. I’ve always been warm blooded, I have fair Irish skin and naturally curly hair. These are not good traits to have in Charlotte’s hot, humid summers. I sweat, I burn, and my hair does some truly awesome things – not the good kind of awesome, more the “shock and awe” type. I cannot wait every year for Autumn to roll around, for the hazy grey ozone sky to change back to clear Carolina blue, for the early morning air to be crisp enough to drink a hot cup of coffee, for the late evening air to be cool enough to drink a cup of hot tea, for soups and stews and casseroles, for pumpkins and winter squash, for sunflowers and autumn butterflies, for the mornings when you wake up and discover another tree has magically transformed itself overnight, for the magic of Halloween …

Pumpkin Spice people usually make Autumn Bucket Lists, and I’ll be sharing some of my items with you in future posts!

Finally, my fur babies frequently photobomb my pictures, so I might as well formally introduce them.

Prince Harry Pumpkin was rescued from a high kill animal shelter in Nashville – one day before his execution was scheduled. He had obviously been someone’s pet as he was neutered, declawed, and very friendly. He is a strapping lad, quite the talker, and the perfect big brother to his cat siblings. 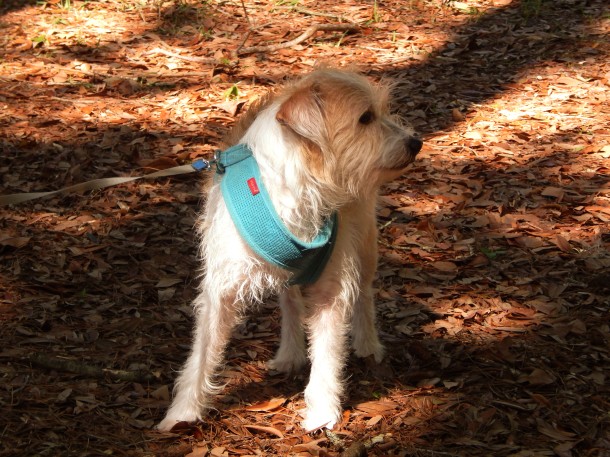 Scruffy the Mighty Toy Destroyer is a Jack Russell Terrier mix. He was abandoned by the side of the road as a puppy. We agreed to foster him. We interviewed several people interested in adopting but no one was nearly good enough for him, in our view. What can I say? Eventually we realized we were foster fails.

Tiger (who passed in June) with Baby Maggie Firsee (the disgruntled looking tortie).

The grey tabby, Tiger, was abused by a middle school girl who thought punting a starving, six week old grey kitten around like a football was funny. He was so badly injured, the first vet my friend Lucinda took him to recommended putting him down. Luckily for me and Tiger, Lucinda took him to another vet who agreed to perform extensive surgery. After that rough start, Tiger wound up living an extremely happy six years before dying of HCM.

The tortie beside him in the picture is Baby Maggie Firsee. She was the result of an unplanned pregnancy and needed a home. And I needed another female in the house – at that time I was living with five furry males! (Two canine, two feline, and one human.) She is a sweet, but odd little thing who likes to hide and hates men. (It hurts my partner’s feelings that she emphatically wants nothing whatsoever to do with him!) She usually looks disgruntled in photos, but that’s just because her markings give her “resting bitch face” – as long as there are no men around, she’s usually quite happy.

So – I’ve introduced me, my blog, and my photobombers! Looking forward to an exciting 2018 Vegan MoFo!