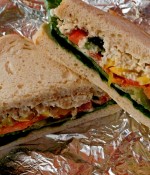 The Common Market at Plaza Midwood is a Charlotte landmark that’s hard to describe. It’s a convenience store. It’s a deli. It’s a bar. It’s a neighborhood hangout. It’s a place to sit and listen to local bands. It’s dog friendly – pooches are allowed on the patio. And, right from its beginnings almost 20… Read More ›

For the past six months or so, seems like all the vegan buzz has been about The Impossible Burger. It’s the “burger that bleeds!” It’s the burger that has the appearance, texture, and taste of “real beef“! It’s better than the Beyond Burger! Or – no, it’s not??? It’s dietarily vegan – unless, of course, it’s… Read More ›

Joining The Produce Box produce delivery service is an easy way to upgrade your food and simplify your life, while supporting your local community.

David In The South: In France They Speak French (Review and Interview)

Charlotte, NC vegan musician David In The South has released an eclectic, uplifting, and blues-tinged LP, “In France They Speak French.” Here’s a review of the EP as well as an interview with David.

Resolve to be a Reducetarian in 2015!

As an ethical vegan, I would love it if everyone in the world was vegan! As a practical vegan, I know that’s not going to happen – at least not in my lifetime! So if an omnivore isn’t willing to completely give up meat and dairy, I urge them to reduce their intake. Take whatever… Read More ›

We’ve discussed the delicious vegan Thanksgiving offerings at Bean Vegan Cuisine and Fern, Flavors From The Garden. But what if you want something that is … a little less traditional? Something maybe a bit edgier? Or a mix of classic and modern? Like … oh, maybe tamales. With a side of green bean casserole. Or… Read More ›

Things turned quite chilly overnight in Charlotte, NC! When I arose this morning it was only 24! Sadly, when taking my dog for his morning walk I noticed many leaves have fallen and there are far fewer trees cloaked in beautiful reds and golds. It’s a good morning to tell you about the cozy comfort… Read More ›

Rarely does a new menu item at a fast-casual restaurant incite so much passion, controversy, adoration, and debate as Chipotle’s new Sofritas. I and 11 other members of VegCharlotte visited a local Chipotle in Charlotte, NC to taste the sofritas for ourselves.

I hope everyone had a happy, healthy, and safe Halloween! And now it’s … the day after Halloween. November 1st. Time to start thinking about … Thanksgiving! For vegetarians and vegans, Thanksgiving has traditionally been one holiday we’re not … quite … so thankful for. It’s hard to get excited about a holiday that’s nicknamed,… Read More ›