Home › Charlotte Vegan News › David In The South: In France They Speak French (Review and Interview)
Join 1,146 other subscribers

David In The South: In France They Speak French (Review and Interview) 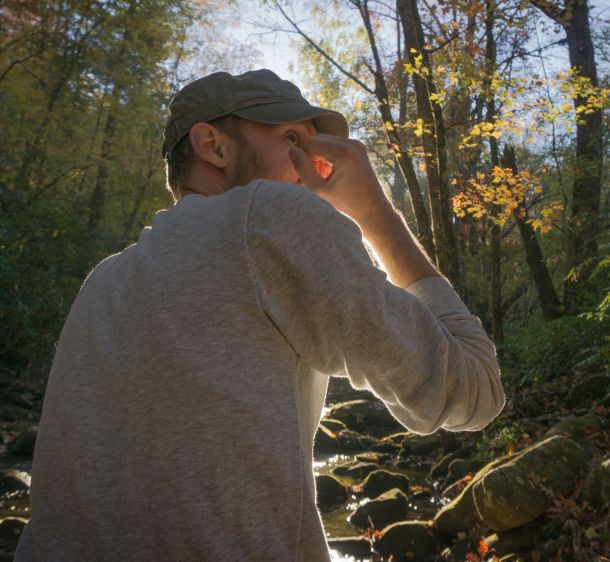 David In The South: In France They Speak French

David in the South has been on my radar for quite awhile.

First, he’s a fixture on the Charlotte, NC music scene. Been to a restaurant/bar lately on a Friday or Saturday night when they have live music? (Think Big Ben’s, Cantina 1511, Chuy’s, Fox & Hound, Hickory Tavern, Libretto’s Pizza, Pizza Peel, The Rusty Onion.) If so, then you’ve probably heard him perform a very eclectic mix of covers along with a few original songs.

Second, he’s vegan and a member of my VegCharlotte Meetup. My partner and I spent a very pleasant evening with David last fall at Fern, Flavors from the Garden, talking food and music. At the time David had just begun recording an EP. He planned to write, arrange, and produce all the songs himself – as well as play most of the instruments!

Based on what I knew about David and his music, I was expecting great things, but this album exceeded expectations!

Three things you should know about In France They Speak French:

It’s Not Your Mama’s Blues.  Since I knew David loves country-blues, and since the EP is categorized under “Blues” on iTunes, I was expecting something more traditional. The EP is certainly blues-tinged. But it’s a little jazzy as well. It takes a nod at late 60’s/early 70’s British pop, as well as 90’s alt-rock. It doesn’t neatly fit into any specific genre, which is one thing that makes In France They Speak French so enjoyable.

It’s Upbeat, Positive Music.  I don’t know if it’s the music, the lyrics, or the fact that David is obviously having a blast. (Or a combination of the three!) But it’s impossible to listen to this EP and not feel your mood improve.

It’s More Complex Than It Seems. Some music (Taylor Swift songs come to mind) is extremely catchy. But upon hearing the song for the 50th time, I realize I’ve never taken away anything more from the song than I did the first time I heard it. With David’s songs, there is more going on than you realize at first listen. The mixing of genres, the way the music/instruments are layered, certain vocal inflections … I liked the EP on first hearing but I enjoy it more on each listen.

Gimme Gimme – A little bluesy, a little jazzy, very upbeat.  It reminded me of music I’d hear in New Orleans.

Just Ask Eleanor – Another upbeat song (complete with whistling) that would also feel at home in New Orleans. Playful lyrics that are reminiscent of Lennon/McCartney.

When I Die – Now we move from New Orleans to Memphis for this surprisingly happy, bluesy song about death. (Yes, you read that right – it’s a feel-good song about death.) David breaks away from singing and playing harmonica to deliver an encouraging message … “You only got one life and that’s your life. You gotta do what makes you happy, not what makes everyone else happy. You gotta be true to yourself. You gotta just sing!” and then he starts singing and exhorting Grandma to “shake it!”

You’re So Special – An almost perfect, bubbly love song in the style of late 60’s/early 70’s British pop-rock. The Beatles and especially the Kinks came to mind.

Come July – This haunting song reminded me of some of Billy Corgan/Smashing Pumpkins’ softer, prettier music. It’s not as buoyant as other songs on the EP. It’s about the breakup of a friendship or relationship. Still, hope is held out that “come July,” when he sees his friend/lover again, everything will be OK. So, a wistful yet hopeful song without any irritating self-pity.

In France They Speak French is available on iTunes: https://itunes.apple.com/us/album/in-france-they-speak-french-ep/id986415468

VegCharlotte: Tell me a little about your album.

David: I wrote, arranged, and produced all the songs (co-produced Come July).

I played all of the acoustic and electric guitars, the piano, the bass, the vocals, light percussion (including spoons), harmonica, mandolin, ukelele, kalimba.

Come July was the only song I didn’t play the bass for, and that’s the only other song with an additional vocalist; the background vocals are actually from one of my guitar students (who I believe is still in middle school).

VegCharlotte: What motivated you to take the leap to make a studio album?

David: Man, so many things that motivated me…..I write an enormous amount of music on a daily basis, and my social life is me making my instruments talk to me and they are my friends …  I started realizing how important it was to me personally to record. I picked some of my more commercially viable songs for this one because I figured if I can sell enough and appeal to a broader audience, then I can get them into the other kinds of music I write. I bring up selling enough because making an album is extremely expensive and I want to make enough to go back again.

VegCharlotte: What are your musical influences?

David: Blues. Blues. Blues. Biggest influence. Love country blues, stuff from the 1930s…really blues from the 20s-70s have significantly shaped me as a musician. But that’s just the most recent influence. I listen to a wide variety. Collectively, the solo black blues singers and guitarists, and frontman singers and guitarists have influence me the most. Mississippi John Hurt, R.L. Burnside, Big Bill Broonzy, Skip James, Howlin’ Wolf, Otis Redding, Bill Withers, Albert King just to name a few….My favorite singers specifically would have to be Harry Nilsson and Robert Plant, but again there are just so many. My all-time favorite and most influential bands are the Beatles and Led Zeppelin; they were both creative geniuses (though Zeppelin stole or borrowed a lot of material).

Another artist that I absolutely love is Blind Willie McTell. He was phenomenal on guitar and had a real sweet voice. Also my newest favorite is this guy Champion Jack Dupree; he’s a champ, he’s funny, and all his music is fun.

VegCharlotte: Several of your songs (Gimme Gimme, Just Ask Eleanor) reminded me of music I’d hear in New Orleans. Have you spent time there?

David: Haha, you’re actually second person to tell me that. I’ve never spent time in New Orleans, but I’m heavily influenced by southern music, mostly blues. I’ve listened to a lot of Delta Blues which is from that region.

VegCharlotte: One thing that really made your EP stand out to me is how fun, upbeat, and positive it feels.

David: Music that is fun and warm hearted is very spiritual to me, it’s very special and seems less common these days. I think people brush over a lot fun or upbeat music and don’t value it as art the way they do sad or serious songs…but in listening and learning how to play these blues songs, I’ve actually found them to be incredibly creative, tasteful and talented.

David: Really? That’s cool. When I started guitar I was all about “the British Invasion” stuff … I LOVE the kinks. Ray Davies (who I believe is vegetarian, as well as his brother) was a fantastic songwriting genius and a great singer. It’s bands like the Kinks that made me realize that structurally and lyrically there were no rules.

In France They Speak French is available on iTunes: https://itunes.apple.com/us/album/in-france-they-speak-french-ep/id986415468

« Everything You Need To Know About Coconut Water … Plus A Review of Cocozia!
Restaurant Review: Chuy’s Mexican Food »