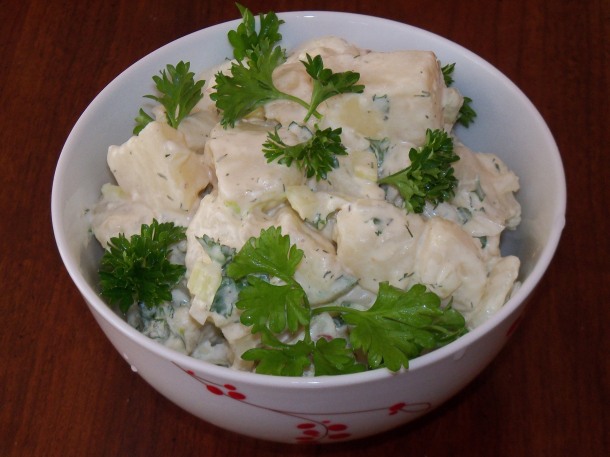 Look!  It’s Not Yellow At All!

In my neck of the woods (the American South), potato salad was usually alarmingly YELLOW.

It was also alarmingly SWEET, with both sugar and sweet pickle relish.

It was ALWAYS drowning in mayo. (I think potato salad was originally conceived as an excuse for eating mayo!)  Unless it was drowning in Miracle Whip, then it was even worse!

It usually had hard-boiled eggs, and was often topped with bacon crumbles.

My mom didn’t subscribe to bacon and eggs in potato salad, but her potato salad used to be sweet, mayonnaise-y, and pickle-y, too.

Then she underwent a revolution.  She became a Richard Simmons devotee, lost over 100 pounds on his “Deal-A-Meal” plan, and began subscribing to Cooking Light.  Goodbye, fried chicken and fried squash.  Hello, grilled chicken breasts and sauteed squash.

My stepdad was not too happy about the (non-fried) turn of events, but Mama had turned a corner and wasn’t about to abandon her newfound healthy way of cooking.

Mama also started making this potato salad.  I’m not sure if it was a Cooking Light recipe or her own creation.  I suspect it was a bit of both.  It was a pretty radical potato salad for the time and place.  For starters, it wasn’t yellow at all.  It was salty and savory, not sweet.  It tasted of dill, but there was not a single pickle.  She also used yogurt instead of mayo, which probably saved about 1000 fat calories.

I was thrilled when I came across her recipe recently.  The only thing I had to do to veganize it was substitute Vegenaise for the yogurt.