It’s time to announce the 2013 VegCharlotte Awards for Best Sandwiches!

And the winner is … Zizi’s.

I know, I know.  Not much of a surprise, huh?  After all, Zizi’s IS a vegan deli specializing in vegan sandwiches.  (They do offer salads, smoothies, and entrees, but Zizi’s mock-meat sandwiches are what we know and love Zizi’s for!)

Voters did list specific sandwiches and it seems everyone has their favorite.

Zizi’s sandwiches seem to be especially popular within three groups:

(1)  Those new to the veggie lifestyle who are missing meat (“I can’t get over how much the chicken salad tastes like chicken salad”);

(2) Those vegan ladies with boyfriends/spouses/partners still a bit leery of the vegan lifestyle (“My husband won’t touch tofu, but he WILL eat a Philly Cheese Steak or a Crispy Chicken Wrap!”); and

For slightly healthier fare minus the mock meat, voters like The Common Market and Berrybrook Farm.

(OK, I know Zizi’s also offers healthy, no-mock-meat sandwiches such as the Grilled Veggie Sub and Avocado Sandwich – but VegCharlotte Voters would apparently rather eat a Cheese Steak when they go there).

At Berrybrook Farm, voters who like tempeh happily noted that Berrybrook Farm has a variety of three different tempeh sandwiches – a Veggie Tempeh Sandwich with tomato, spinach, onions, red peppers, avocados, and pesto; a Tempeh Reuben; and, for lacto-vegetarians, an Apple-Cheddar Tempeh Sandwich.  They also have Grilled Cheese, a Patty Melt, a Pizza Wrap and a Black Bean Wrap – $4.25 – $6.25.

The Reuben – “Possibly the best reuben I have had in my life – and that includes when I was eating meat!”

The Crabbie Patty Sandwich – faux crabcake made of jackfruit and described as “da Bomb!”

And the BBQ Jackfruit Sandwich.  “I love how Bean uses jackfruit in their dishes.  I like having options other than soy.”

Bean’s sandwiches are all $8.50 and served with your choice of side from their quite extensive list. 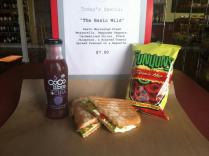