By Catherine of VegCharlotte • November 5, 2013

It’s officially Holiday Party Season!  Last weekend I held my Halloween Party, now it’s Diwali, and soon it will be Thanksgiving, Hanukkah, Christmas, Kwanzaa, New Year’s Eve, and New Year’s Day.  In between there will be dozens of dinners, potlucks, parties, and cocktail parties.

Both vegans and omnivores often have difficulty when faced with a vegan Holiday party.  Omnivores are often clueless as to what, exactly, “vegan” means.  And vegans are haunted by thoughts of the party food they used to make and eat – cheese nachos, creamy artichoke and spinach dips, casseroles made with cream of mushroom soups.

The result, if you’re not careful with your party planning, will be twenty people showing up with twenty containers of store-bought hummus.

Because I’m just a helpful kind of gal (and always willing to spread the vegan love), over the next few weeks I’ll be sharing some vegan appetizers, side dishes, and vegan party tips.

I always enjoy experimenting with different flavors of homemade hummus for my parties, but, anticipating a hummus influx, I decided to experiment with vegan 7 layer bean dip.  Vegan seven layer dips have been around forever, but what’s always struck me about them is how expensive they are.  Canned refried beans … vegan sour cream … a packet of taco mix … a jar of salsa … a carton of prepared guacamole … Daiya cheese … That’s one pretty expensive little appetizer there!

And then some people like to do it the completely made-from-scratch way, cooking the beans from dried and then “refrying” them with garlic and onions, making their own salsa and guacamole, and topping it off homemade raw cashew cheese.  Whew!

I tried to strike a bit of a balance.   First, I eliminated waste and stretched the recipe by using a whole can of beans (what’s with these recipes that use half-cans?)  I did use Vegan Gourmet Sour Cream, but would have used homemade soy yogurt if I hadn’t been running low.  I made my own taco seasoning blend instead of buying one of those expensive little packets, used Rotel tomatoes (bought on sale with coupons, of course!) instead of salsa, and fresh avocados instead of prepared guacamole.  Finally, I left off the expensive vegan “cheese” (which I try not to serve to omnivores, EVER, because it tastes like crap and scares them off from vegan food) and added extra flavor with both black and green olives.

Put the refried beans in a small pot with a few tablespoons of water.  Heat only long enough for the beans to become creamy.  (I find, in general, canned refried beans are too thick for my liking unless I add extra liquid.)

Spread the beans in a casserole dish or large shallow bowl.  Let cool slightly, so the sour cream doesn’t “melt.” 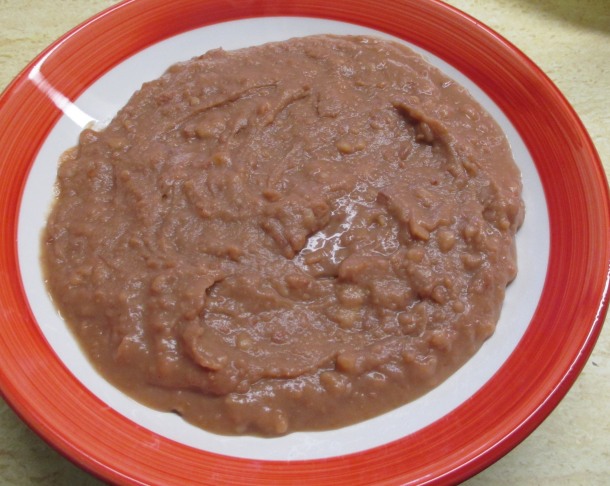 Mix the sour cream with taco seasoning mix.  Spread evenly over the beans. 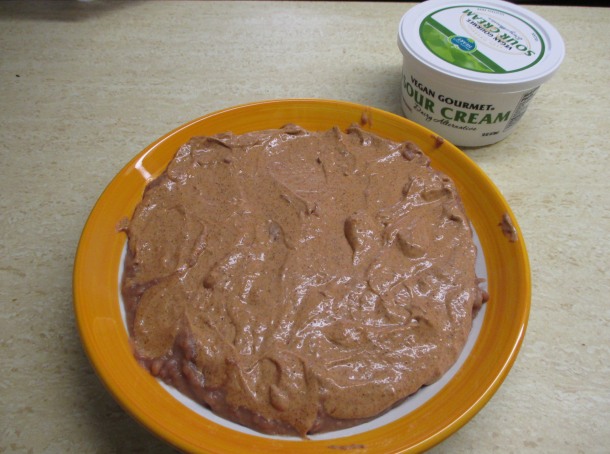 Remove the avocado pulp from the shell and remove the pits.  Squeeze the juice of the lime over the pulp and roughly mash with a fork.  (This will prevent the avocado from turning brown.)  Spread evenly on top of the sour cream. 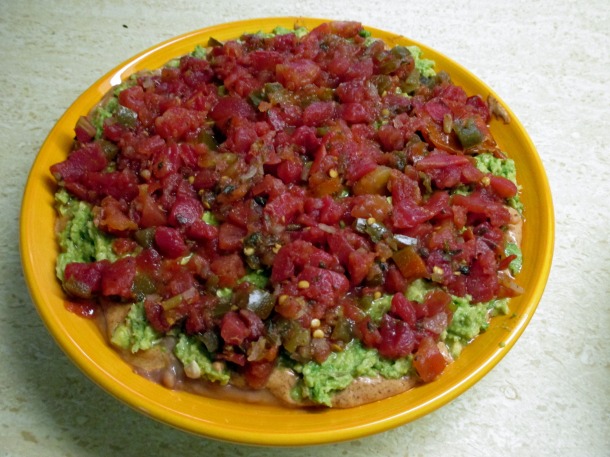 Drain the Rotel tomatoes very well.  Spread evenly on top of the avocado.

Spread lettuce evenly over all.

Arrange the black olives, green olives, and green onions artistically on top.  Well, no, it doesn’t have to be really artistic, but spread them around a bit so you get a nice color display.