Saturday, May 17th, was the Third Annual Charlotte VegFest!

It was also my third year attending.

The first year I helped out at the Chelly’s Cakes ‘N Pastries booth.

The second year I could be found at the booth for Keep Charlotte Boring (another blog I write for).

This year, however, I attended as just part of the crowd (albeit a part with a large camera and two bearded friends). We arrived at the festival mid-to-late afternoon, as we weren’t interested in the speaker lineup.  (Half the lineup was the same as last year:  Gene Bauer, Leilani Munter, bellydancers. Yawn.)

My #1 Tip For Going To VegFest:  Take a bottle of water with you. If you’re bringing your dog, take a bottle of water for him as well. You’re definitely going to be tasting, sampling, and most likely just chowing down, so you’ll need something to drink.  And the vendors sell bottled water at $1 a pop!

My #2 Tip For Going To VegFest:  If you eat salt, take some little packets of salt with you.  Vegan food tends to be under-salted (perhaps because so many people with high blood pressure have turned to vegan food as a form of natural treatment).

My #3 Tip For Going To VegFest:  Take cash.  Most of the vendors don’t have credit card readers for their Smart Phones.

The first booth we came across was Bean Vegan Cuisine, a Charlotte, NC restaurant that specializes in vegan comfort food.

My good friends Roy and Charlie of Bean Vegan Cuisine!

This was Bean’s first time participating in VegFest.  They were offering club sandwiches as well as Mega Bean Salad, Pimento Cheese Dip and Crabbie Dip with corn chips, Cajun Pasta Salad, and … wow, looks like Blueberry Cobbler. How the heck did I miss Blueberry Cobbler? 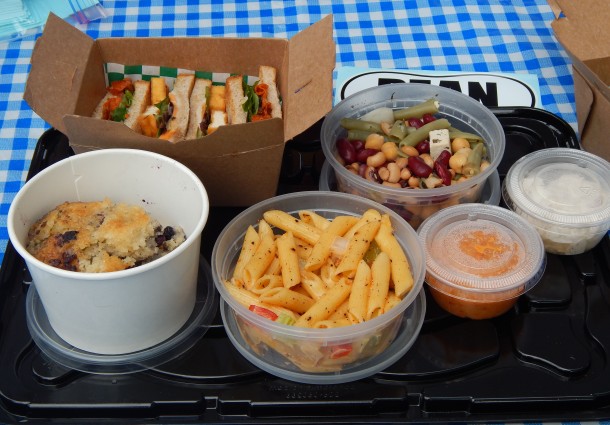 Charlie warned they were in danger of selling out of Club Sandwiches, so, in a panic, all three of us immediately purchased half a sandwich.  The Club Sandwich is one of Chef Charlie’s newest creations and substitutes thin slices of extra-firm tofu for turkey and carrot bacon for bacon.  Of course there’s juicy fresh tomato, leafy greens, and vegan mayo and cheddar cheese.  As Charlie would say, “It’s good, ya’ll.”

Next stop … Fern, Flavors from the Garden!  This was also Fern’s first time participating in the Charlotte VegFest. Fern is a local vegetarian/vegan restaurant that offers very elegant veggie food.  Fern started out three years ago as a mostly vegetarian restaurant but has progressively become more and more vegan over the years, to the point where the new Spring menu is about 90% vegan.

Fern, Flavors From The Garden

Here is a picture of my VegCharlotte intern standing in front of the Fern booth.  He lugs around my tote bag loaded with my camera equipment as well as my aforementioned bottled water and salt.  And he holds my food while I take pictures.  Every blogger should have an intern.

Next stop:  Luna’s Living Kitchen.  Luna’s is Charlotte’s raw vegan restaurant.  Don’t let the word raw scare you – they offer delicious entrees, decadent desserts, and phenomenal juices.  Luna’s was another first-time participant.  Luna’s offered, among other things, their amazing Lunasagna and Berry Cheesecake.  If I hadn’t just had lunch at their restaurant two days before and ordered the exact same thing, I would definitely have purchased these.

Zizi’s Awesome Vegan To Go was doing a brisk business as always. Zizi’s has participated in every Charlotte VegFest since the beginning. Zizi’s is a vegan deli known for its Philly Cheesesteaks, Chicken Wings, and Chicken Salad sandwiches.  Today, however, they were offering healthier fare, such as Lentils and Quinoa and Kale Salad.  Bleah – if I had wanted healthy vegan food, I would have stayed home and cooked! Zizi’s had sold out of their Chicken Salad sandwiches, so we moved on. 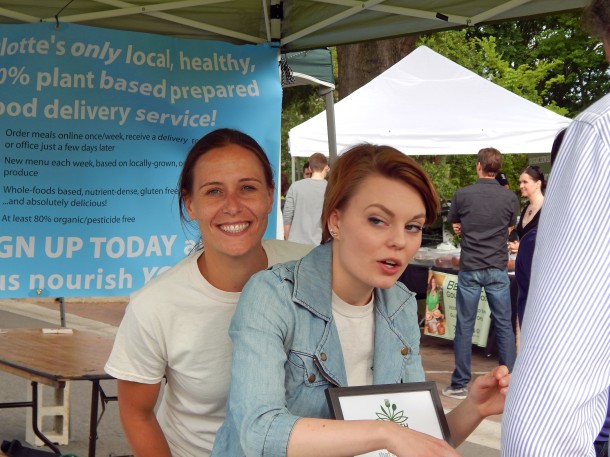 Jessica and Caroline of Nourish

Nourish started business right about the time of the first Charlotte VegFest and has participated in each and every one.  Nourish is an amazing vegan success story!  If you haven’t checked out their online ordering menu lately, you should! They’ve doubled their weekly entrees from two to four and dropped their minimum order price from $60 to $50.  They’ve also partnered with several other local vegan companies, so when you place your Nourish order you can also order energy bars from Bruks Bars, desserts from the Naked Tart, and raw juices from Viva Raw.  Nourish even offers a safe and easy 5-day “cleanse” that combines Nourish food with Viva Raw juices. 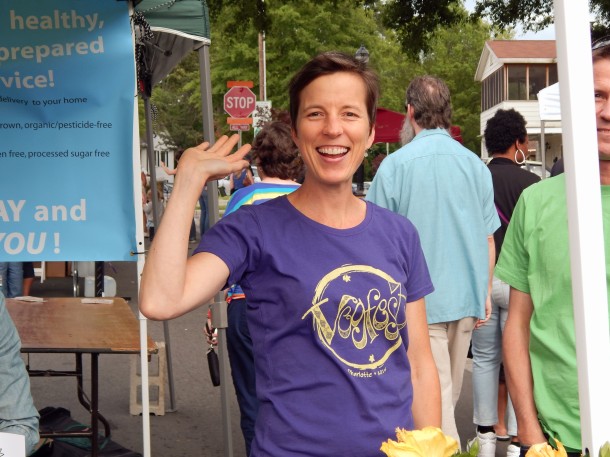 Laura, one of the founders of Nourish

If you’re wondering why everyone at Nourish seems so dang … VIBRANT … perhaps it’s because of the 100% vegan, gluten-free, organic, locally sourced food?

And speaking of Viva Raw …

We had to stop and sample the juices.  Green Clean, Good Karma, Beet Boost, and Pro Fuel. I’ve had them all before, but I willingly tried samples of them again! Yum.

Next stop:  Lenny Boy Brewery – Kombucha, Wild Ales, and Traditional Beers.  This was an alcohol-free event, though, so there were only kombuchas.

There were many booths about animal rights and animal welfare, including Farm Sanctuary, Mercy for Animals, and the Humane League. One was Who Are We Fighting For?  After visiting the booth, I still wasn’t sure who they were fighting for, but I thought these teddy bears were adorable. 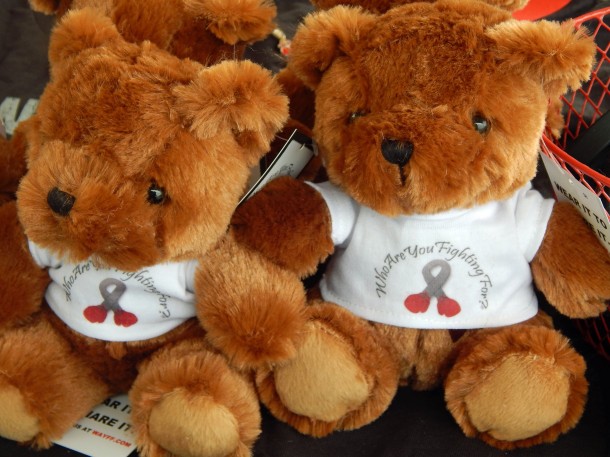 Speaking of animal welfare booths – some of them are quite savvy in their approach, but others needed to realize this event was attended almost exclusively by vegetarians and vegans.  As one of my friends observed as he listened to a speaker, “This is boring, because everyone here already knows that eating meat is wrong.”

This polite young man had the right approach.  He was passing out advertisements for the Happy Cow restaurant website. 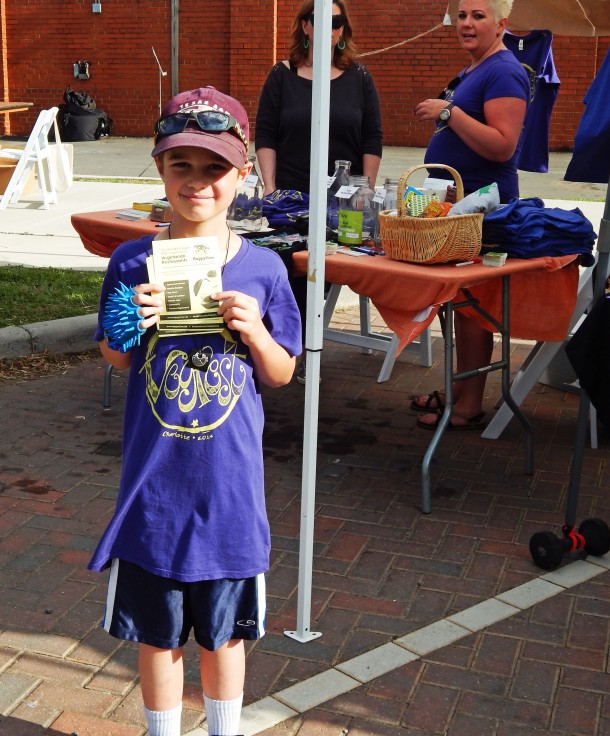 This was The Greener Apple’s second year participating in VegFest.  The Greener Apple is a very cool little eco- and veg- friendly store within Charlotte’s coolest used book store – Book Buyers on The Plaza.  You can find all sorts of things from veg books to grocery products to vegan dog food to natural and animal-friendly skin care.  Highly worth checking out.

My fellow curly girl Lee Rathers of The Greener Apple. 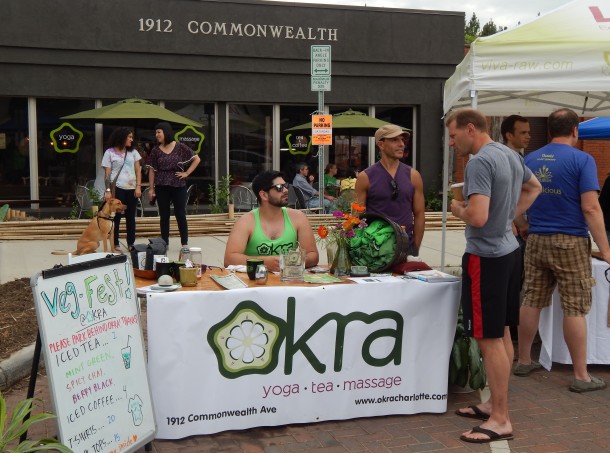 Here’s something new and noteworthy – Duke’s Bread.  Duke’s Bread recently set up shop on The Plaza, in the bungalow recently vacated by BeadLush.  You’ve probably already had Duke’s Bread if you’ve eaten at Fern or other Charlotte local restaurants.  Now Duke’s is selling their artisan bread direct to the public!   Unless it has cheese (you’ll know by the name – i.e., Gorgonzola Round), all the breads are vegan.  Starting June 1, Duke’s Bread will also host a Farmer’s Market on Sundays at their lot from 11:00 am – 4:00 PM. 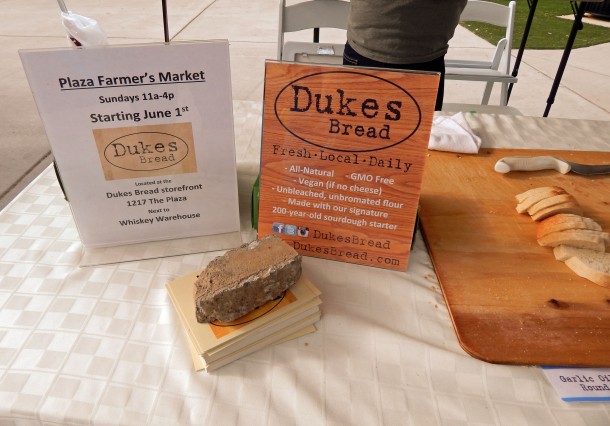 Below is the King of Pops – popsicles with unusual and refreshing flavors – and Toushea Body Boutique.  There were many natural and cruelty-free body and beauty products at Charlotte VegFest. 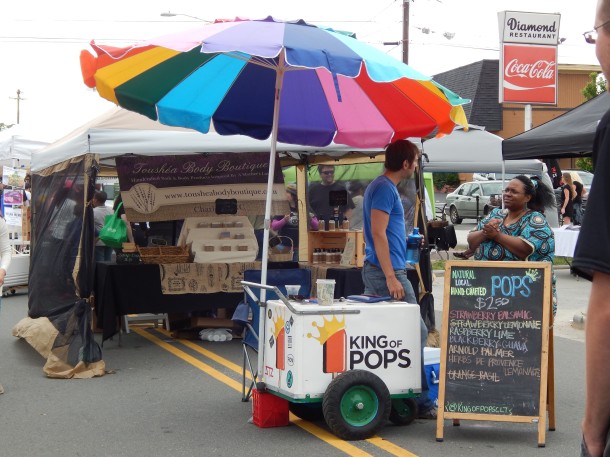 Wait … what’s this?  Who are those bearded men?  They certainly don’t look like they’re selling lavender soaps.

Turns out these follicularly gifted men were representatives of the Beard and Mustache Club of North Carolina – Charlotte Chapter.  This organization promotes the public appreciation and acceptance of fluffy follicles while raising money for their partner charity Safe Alliance, which helps victims of domestic violence.  Meetings are held the third Tuesday of each month at The Chop Shop.  Women and less fortunate men always welcome. 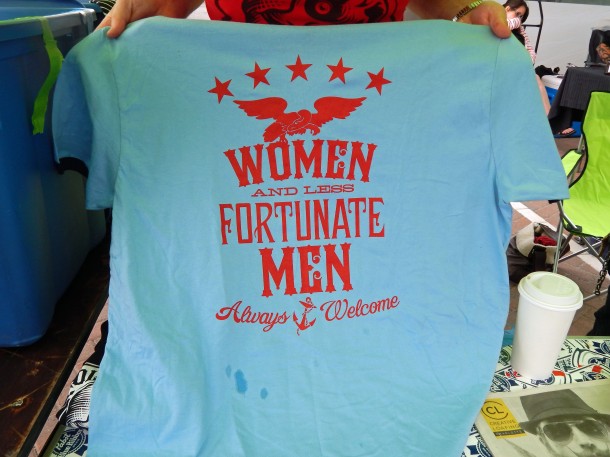 I enjoyed talking to these guys – they added some much needed levity to an otherwise rather serious event.  And VegFest was the perfect place to find new recruits – beards were everywhere!  (Scroll back up through the pictures and you’ll see what I mean.)  Vegans are not a very clean-shaven bunch. 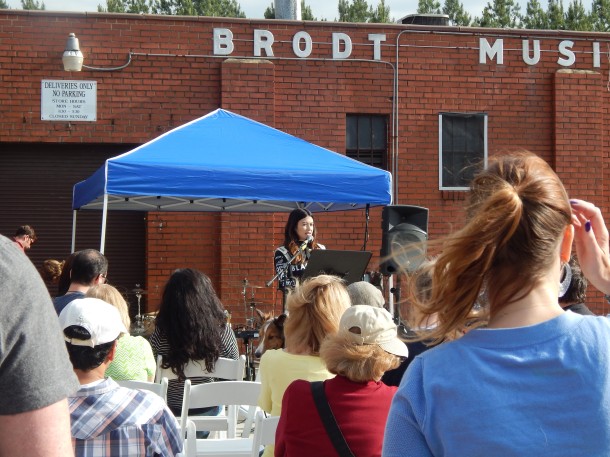 Her car, Tilly, was cool, though.

You have to like Leilani just because Sam Simon does.  Sam Simon is the co-creater of the Simpsons and thus, has accumulated a wee bit of money over the years. Diagnosed with terminal cancer (colon cancer that spread to other organs), Sam is dedicating himself to giving his entire fortune away by feeding the hungry (with vegan food only) and supporting animal welfare issues.  When Leilani was trying to raise the $115,000 entry fee to race in Talladega, Sam came up with the balance.

This car was cool, too …

And of course, one of the things I love about the Charlotte Vegfest is meeting other vegan friends I may not have seen for awhile – like my friend and animal activist Lee Whitaker.  Or my beautiful friend Alissa and her beautiful dog Basil, a retired racing greyhound. 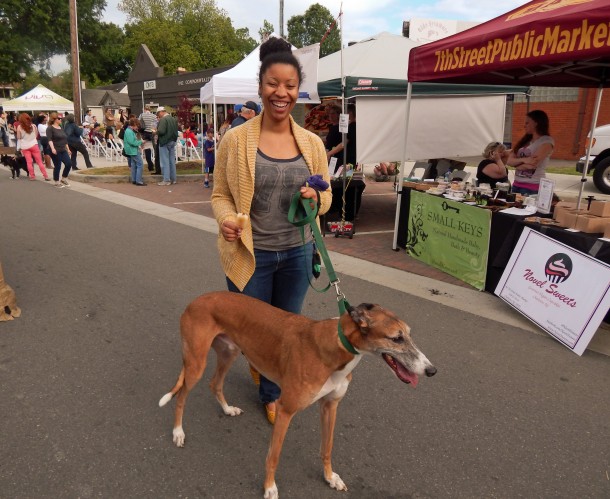 Charlotte VegFest even had live music.  Unfortunately, the band didn’t play until the very end – after vendors started packing up their tents. My friends and I had already moseyed off to The Common Market – ironically, to listen to live music!

Here’s what I’d suggest to make the Fourth Annual Charlotte VegFest even better:

Hold it in a park.  (Especially since everyone brings their dogs!)

Have more live music, and have it earlier in the day, in between speakers.  (I hear there’s a great local band called Perfect Strangers who has an amazing vegan singer!)

Vary the speakers a little bit, offer something that might be more of interest to long-term vegetarians and vegans. Cooking demos.  Tips on living a greener lifestyle. The health aspects.  A professional athlete who shares his or her vegan training tips.

Who knows, if VegFest was held in a park, with beer and live bands – I bet even a few omnivores would be enticed to check it out!

All in all, a great event and I look forward to what 2015 will bring!