Growing up, I was never fond of fish.

But I did love my mama’s tuna burgers. They were similar to tuna melts, but instead of placing a slice of cheese on top of tuna salad, she’d actually mix the cheese into the tuna salad.  Then she’d load the salad on buns and bake in the oven.

As I got older, tuna burgers became one of my go-to recipes.  Easy, inexpensive, and everyone loved it. (Might I add, this was in the days before much was known about the high mercury levels in canned tuna.)

And then I became vegetarian, and then vegan.  I did try re-creating these tuna burgers with chickpea “tuna” salad recipes, but sadly they all tasted like chickpea salad.  Sometimes very good chickpea salad indeed, but still. Chickpeas.

So I resigned myself to having eaten my last tuna burger melt.

And then I discovered this awesome recipe for tempeh chicken salad. And I thought, maybe, just maybe, I could make vegan tuna salad from tempeh!

One package of 3-grain tempeh, a whole lotta dill pickles, and a spoonful of kelp flakes later I discovered that, yes, indeed I COULD make a vegan tuna salad that tasted a heck of a lot like tuna!

Since I’m not a big fan of Daiya cheese, I then attempted to recreate the “melt” part with nutritional yeast and a bit more Vegenaise than usual to replicate the creamy, cheesy texture.

A couple of good grinds of Black Pepper

Steam the tempeh for 25 – 30 minutes.  This is SO important – you want the tempeh to have a soft texture to mimic tuna fish!  If you have a steamer insert, like I do, check on it in 10 minute intervals to make sure the water doesn’t all boil away.

Once the tempeh is done, begin preheating your oven to 350.

Next step is to chop the tempeh into chunks.  Since it’s been steamed so long, this should be easy.  The soybeans should be crumbling apart from each other. Place in a large mixing bowl.

Pour the dressing over the tempeh and stir to distribute dressing evenly.  If the tempeh tuna salad seems dry, add up to another 1/4 cup Vegenaise (go slowly, a spoonful at a time). Since I’m using the Vegenaise to recreate the creamy texture when baked, I use a little more mayo than I normally would. 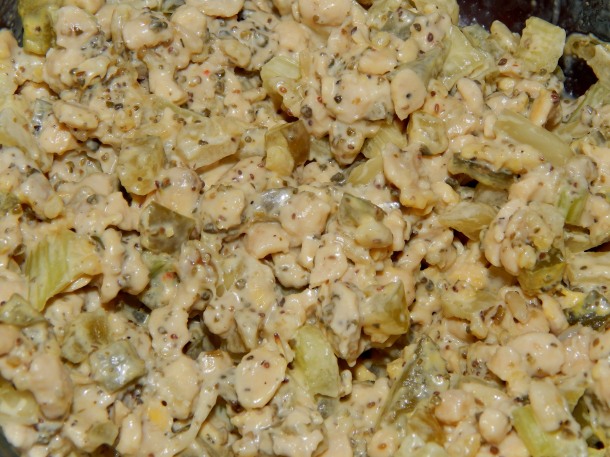 Tear off a sheet of aluminum foil and place an open bun on top.  Heap the bottom half of the bun with tempeh tuna salad and then replace the top half of the bun.

Roll the foil up around the sandwich, twisting and pinching the ends.

Remove from foil immediately (you don’t want the buns to “steam” and become too soft).  Enjoy immediately!

This makes enough for 6-8 sandwiches.  You don’t have to make all the sandwiches at once. I’ve whipped up a batch of tempeh tuna salad, stored it in a glass container in my fridge, and just baked one or two tempeh tuna melts at a time over the course of a few days.

If you want to make a cold tuna salad instead of a hot melt, use a sweet or red onion instead of a yellow onion, omit the nutritional yeast, and add a squeeze of fresh lemon juice.

A spoonful of capers also makes a nice addition.