Home › Restaurant Reviews › The Evolution of Fern, Flavors from the Garden

The Evolution of Fern, Flavors from the Garden

It’s been exciting to watch the evolution of Fern, Flavors From The Garden since their opening in 2011.

Fern is part of the Mother Earth Group (which also owns Something Classic and the meat-centric Halcyon, Flavors from the Earth).

Originally, Fern seemed more geared to the “Meatless Monday” people, with a mostly vegetarian menu, plus management and servers who could be a bit clueless about the vital differences between vegetarian and vegan diets.

(In Fern’s defense, the “logic” in 2011 was that Charlotte, NC was a land of bankers and BBQ, where steakhouses and foie gras thrived but the vegan/vegetarian community wasn’t considered a large enough market to seriously cater to.)

Soon, then-manager Lou Bohland and first Executive Chef Alyssa Gorelick learned that there really was a thriving and under served vegan market in Charlotte.  More vegan items appeared on the menu. Servers became more knowledgeable – with a few actually being vegan or vegetarian themselves!

About a year later Alyssa Gorelick left Fern and returned to eating meat – supposedly to fuel her workouts (because how else is a girl gonna get her protein?)

Playful takes on meat also appeared, such as a Surf And Turf dish of seitan “steak” and radish “scallops;” a Cauliflower Steak; Pumpkin Filet. 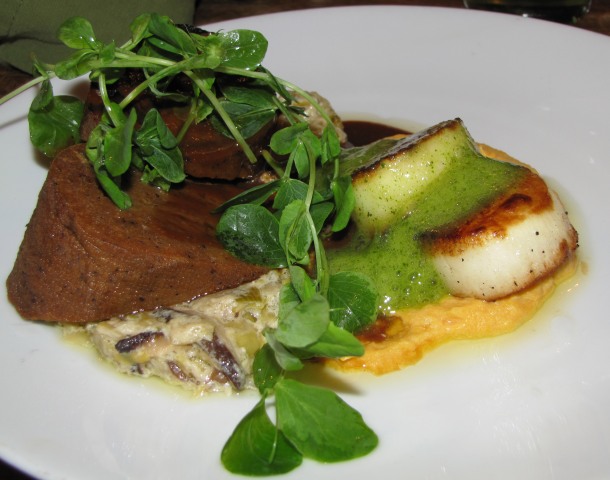 Who knows how Fern’s food will continue to evolve under Matt’s ideas and creativity?  We’ll begin to find out when Fern’s new seasonal menu for Autumn is released on October 2nd (that’s later this week!)

I do know (according to Fern’s Facebook page) that Matt is responsible for the astoundingly good Sweet Potato Reuben Sandwich.  Yes, sweet potato.  I don’t even like sweet potatoes but I love this sandwich!  It’s an inspired pairing of sweet and sour flavors – plus I love the look of purple cabbage sauerkraut with the orange sweet potato! I’m hoping it stays on the Autumn menu.

I also know that a vegan version of Shepherd’s Pie will be on the fall menu, as well.  Lentils, corn, butter beans, and whipped potatoes. Could comfort food get any more comforting?

One final note of change:  Longtime General Manager Lou Bohland left Fern last year to work at BAKU Sushi Restaurant (probably a better fit for the friendly and outgoing omnivore) and the “new” manager, Susan Walley, has now been at Fern for a little over a year. The restaurant seems to be running more smoothly than ever.  And Fern certainly did an excellent job accommodating our large group at a recent VegCharlotte Meetup event – from reservations and seating; to bringing out everyone’s food at the same time, hot, with no menu snafus; to seeming to be truly happy to see us and our large group of 14; to not appearing to mind when we stayed a little after closing!

A really wonderful experience – and a much better experience than a few years ago, when my former Assistant Organizer had quite a time trying to organize a meetup with Fern – old management wanted no more than a party of six people, he wrestled them to eight, and then Fern changed the reservation time!

New-ish management, new chef, and new seasonal menu – I have the feeling it’s going to be an AWESOME Autumn at Fern!