By Catherine of VegCharlotte • November 4, 2014

Chipotle publicity photo emailed to me with their press release

Rarely does a new menu item at a fast-casual restaurant incite so much passion, controversy, adoration, and debate as Chipotle’s new Sofritas.

Making it even more amazing is the fact that Chipotle’s first new menu item in 20 years is vegan.

Sofritas have been available in select Chipotle restaurants on the East Coast and in California, Colorado, and the Pacific Northwest for some time. On October 13th, Sofritas became a permanent menu item in the restaurants in Chipotle’s South and Southeast region – including North Carolina.

I should probably explain here what Sofritas are. Perhaps because of Chipotle’s beautiful publicity photos, I was under the impression it was a type of burrito. Turns out Sofritas are actually a filling – organic tofu braised with chipotle peppers, poblano peppers, and spices. The name comes from “sofrito”, which is a base used in many Spanish and Latin American dishes featuring peppers, onions, sauteed garlic, and tomatoes. So you can order “Sofritas” as a burrito, a burrito bowl, a salad, or a taco. From there you can customize your order as you like, selecting white or brown rice, black or pinto beans, and choosing from four salsas. 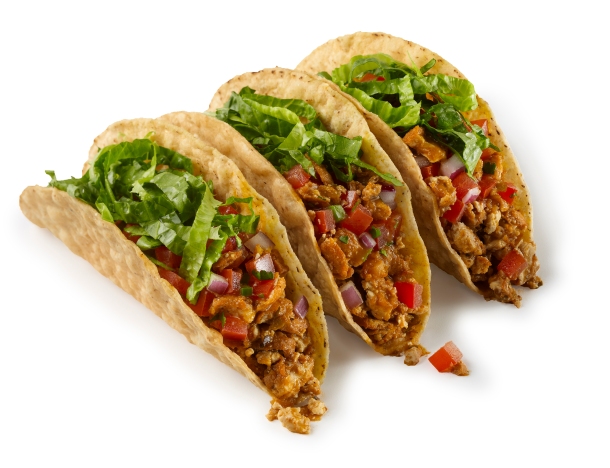 Chipotle publicity photo emailed to me with their press release

Chipotle was nice enough to send me a press pass inviting me to their VIP media line-tasting event. When I wasn’t able to attend, P.R. followed up and offered to send me coupons for free Sofritas for my VegCharlotte Meetup group.

Before the Meetup event, I polled VegCharlotte members and my vegan friends for their opinions. One thing is for sure, almost no one was neutral!

Most of the comments were positive. Many vegans were happy they had another menu option. Some had already tried Sofritas in New York or California and were thrilled at the new availability in NC; others had only heard about Sofritas but were excited to try them because of all the hype. There were lots of CAPS and exclamation points!!!!

“I’ve tried these in other states (Maine and Maryland) and they are fantastic! Everyone is in for a treat! I’ve been raving about them to my boyfriend, and he’s been dying to try them!” – Christy

“I’ve been waiting for this to come to NC!” – Rachel

However, not all vegans are thrilled.

“This is why I’ve always been against Chipotle, they only had tofu options in a few select cities and are FINALLY SLOWLY moving wider yet Moes has always offered tofu as an option. I prefer to support companies who have always supported me, rather than companies that reluctantly after years of being asked for an item finally decide to cave and offer it. Long story short, Moes is better.” – Kirsten

“Neat!!!! That’s great! But I do hate the way they promote their ‘humanely-raised’ meat…..there’s no such thing and it gives people a undeserved sense of comfort that they’re acting with concern about the animals.“- Michele

“I was just there yesterday chowin down. Something that cracks me up every time I’m there though is how they describe their ingredients. ‘Food with integrity’. And then go on to say stuff about how their animals are free range and hormone free and everything’s organic etc. But if you actually read into what it says up there, they really have nothing special going. They literally describe their veggies, for example, as being “partially
organic” and “partially grown in season”. They feed their chickens “a diet free of animal byproducts”. Oh, you mean like how they already should be fed??” – Sarah C.

“Options are always rad, y’know? But they’re totally just cashing in. And I’d go to Sabor for a local vegan friendly burrito before ever going to Chipotle. I never, ever go there.” – J.

I fall somewhere in between.

I admit the commercials for Chipotle (featuring a poignant Willie Nelson cover of Coldplay’s “Back to the Start” and Fiona Apple’s darkly beautiful rendition of “Pure Imagination” from Willy Wonka and The Chocolate Factory) are brilliant, haunting, and beautiful. They’re also masterpieces of marketing manipulation.  Like Michele, I believe that “humanely-raised meat” and “food with integrity” only serves to ease people’s guilt about eating meat. And may actually increase meat consumption.

And, I see Kirsten’s point. I’ve always been a Moe’s girl myself … because Moe’s has always had three protein options for me: black beans, pinto beans, or grilled tofu. Chipotle, until recently, only had one vegetarian option – black beans. (For years, Chipotle’s pinto beans had pork.) And I don’t particularly care for black beans.

However … Chipotle moving from one to three vegan options is a very good thing. Of course it’s good for vegans and vegetarians, but I believe it’s also good for animals – the more veg options on a menu, the more likely it is an omnivore will perceive veg options as “normal” and order it themselves, at least part of the time. Chipotle is also aggressively marketing its Sofritas to meat eaters as well, with slogans such as, “Vegans and Carnivores Unite!” 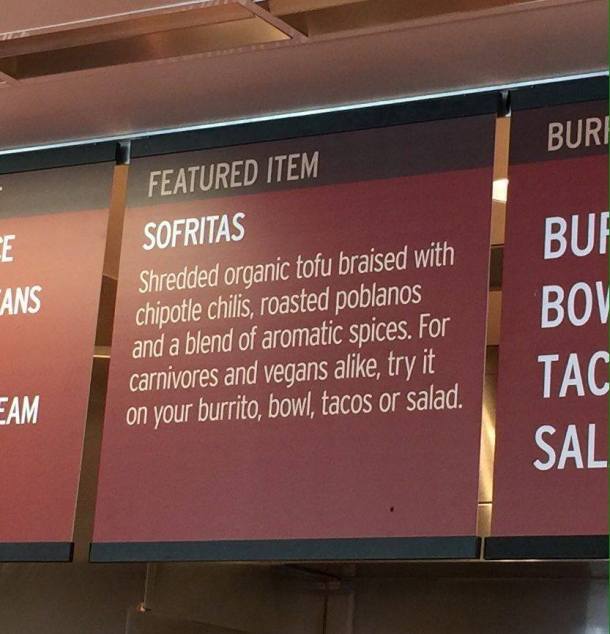 And, Chipotle may well be “cashing in,” but I find it hopeful that a restaurant giant realizes vegans are a large and growing market – and that we have buying power. True, this is a recent turn of events – a Fast Company article by Rebecca Greenfield notes one of the final recipes of Sofritas actually contained honey! Fortunately someone realized that the product they were planning to market to vegans was NOT vegan and the final version now sold in Chipotle restaurants is 100% vegan.

(One wonders if that was also about the time Chipotle had an “ah-ha” moment about their pintos and began phasing out the pork, realizing if they did so they could sell their pintos to vegans, vegetarians, Jews, and Muslims.)

Of course, the big question is, are Sofritas good?

A “real-life” Sofrita Burrito. Not as pretty as Chipotle’s publicity photos, but yummy nevertheless

I and 11 other members of VegCharlotte Meetup dined at the Chipotle on Providence Road in Charlotte, NC to taste Sofritas for ourselves.

I ordered the Sofritas Burrito Bowl, with PINTO BEANS (yay!) and two salsas. (Tip: If you’re watching your waistline, ordering your burrito as a bowl instead of a wrap will save you 300 calories.)

And the answer is … yes, they are good. Very, very good. Excellent, in fact.

First, there’s the high-quality tofu used – Hodo Soy, an organic, GMO-free, “artisan” tofu. (If you don’t know what “artisan tofu” is, check out this article from Bon Appetit.) Forget your bad experiences with soft, jiggly, undercooked tofu at other restaurants. This is a firm tofu, crumbled and shredded, with a chewy, “meaty” texture. Some reviewers have compared the texture to scrambled eggs, but it’s more similar to chewy veggie crumbles or – for you omnivores reading this – chorizo sausage.

Second, this stuff actually has FLAVOR. Very savory, with definite smoky undertones from the chipotle peppers and just enough of a kick! Also, the flavor was consistent throughout the tofu. It’s quite obvious the tofu actually was cooked in the sauce, not just “splashed” afterwards with a little pepper dressing.

The VegCharlotte members with me (a diverse group of vegans, vegetarians, and two omnivores who want to work more meatless foods into their diet) concurred. Everyone agreed they would order Sofritas again.

Starr proves she enjoyed every last bite of her Sofrita bowl.

Sarah said, “The Sofritas were AWESOME!”

Amrik commented, “Chipotle really isn’t doing anything everyone else isn’t already doing. The difference is, this has flavor. This has a lot of flavor.” 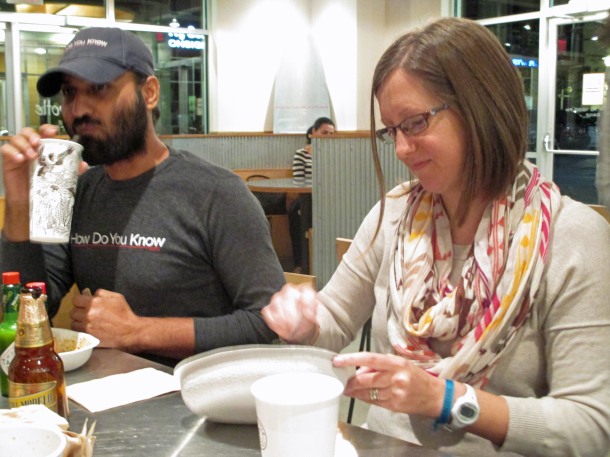 Amrik and Sarah finishing up the last bites of their Sofrita bowls.

Carl: “This is good. Yeah, I can eat this. I can definitely eat this.” 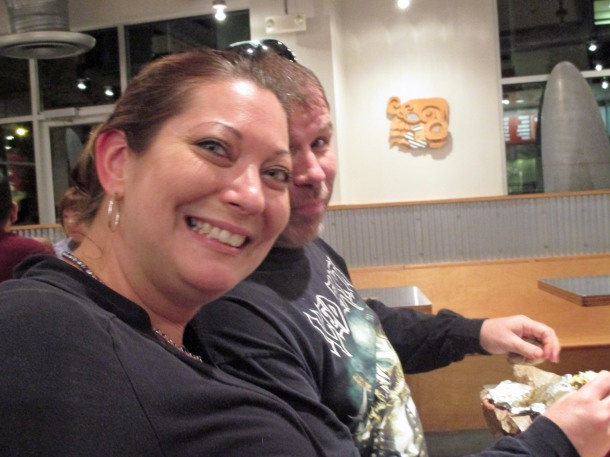 Even the omnivores in our group enjoyed their Sorita Burritos.

The only criticism came from Kay, who thought her Sofritas burrito bowl was a bit salty. She was unsure whether it was the Sofritas, or possibly one of the salsas . . . Probably both. According to Chipotle’s nutrition calculator, Sofritas have 555 mg of sodium (for comparison, the organic grilled tofu at Moe’s has only 290 mg). And both the Fresh Tomato Salsa and the Tomatillo-Red Chili salsa have 500 mg each. My own Sofritas burrito bowl with white rice, pinto beans, Sofritas, Roasted Chili-Corn Salsa, and Tomatillo-Red Chili Salsa had a whopping 2,060 mg of sodium – almost a entire day’s worth!

Heat-wise, I’d describe it as mild to moderately hot. Anyone used to eating Mexican food should not have a problem. (My partner and I actually added hot sauce!) Those with more delicate palates could always tone down the heat some with guacamole.

Which brings me to a point frugal vegans should know. With a vegetarian burrito (or bowl or taco or salad), guacamole is free. But it’s a $2 charge if you add it to your Sofritas.

“I know about guacamole NOW! I made the mistake of adding a little to my sofrita and got nailed 2 bucks for guac. So essentially what I’m doing is paying extra for sofrita. They are sneaky clever bitches at Chipotle’s. They didn’t tell me Jack about the guac…. I only discovered it after I examined my bill later.” – Randy

That little bit of guacamole will make your bowl cost $2 more. Now, you, too, can pay the same prices omnivores pay.

A quick note about the restaurant. Like every Chipotle I’ve been in, it was very clean. The workers were friendly and pleasant and checked on our group several times. Of course, the PR person had given the restaurant a heads-up that we were coming. Still, this young lady’s friendly personality could not be faked. Her smile lit up the entire restaurant. Chipotle needs to hang onto her for as long as possible – and maybe give her a raise. 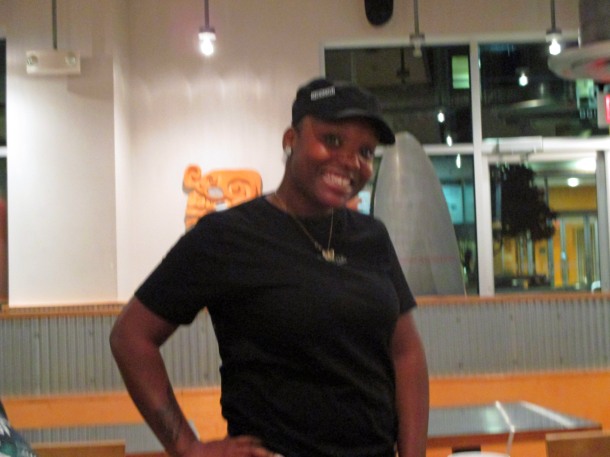 What else is vegan at Chipotle? It’s easier to say what isn’t vegan – meat, cheese, sour cream, and the chipotle-honey salad dressing. All wraps, taco shells, and rice are vegan, as well as beans (finally!) Vegetarians will be pleased to know the cheese used is made without animal rennet.

Ultimately, I think this is a fantastic business decision for Chipotle. They have a quality product and are targeting a growing and overlooked market with a pent up demand. Sofritas will certainly please their current customers and win new customers, including me. Here’s hoping other restaurants are watching the success of Sofritas and will follow Chipotle’s lead in targeting the large and growing market of vegetarians and vegans.

Full Disclosure:  Chipotle sent me 12 coupons for my VegCharlotte Meetup group to taste-test the Sofritas. As always, my opinion cannot be bought, sold, or tampered with. Chipotle is quite controversial among vegans – you love Chipotle or you hate Chipotle – and I have done my best to present various opinions while being as fair as possible.

Are you a Chipotle fan or do you have ethical issues with them? Have you tried Sofritas yet? What did you think?