I created this recipe in honor of Indians, who as we all know played an important role in the first Thanksgiving.

The story has it, the pilgrims were all sitting around bemoaning yet another bland meal and reminiscing fondly about the chicken tikka masala they used to order at that little hole-in-the-wall restaurant in London. Suddenly, a group of brown skinned men, all named Raj, appeared. They were bearing gifts of laptops and cell phones, but more importantly, cinnamon, cloves, and nutmeg. Thus pumpkin spice latte was created, and Americans celebrate every year with this day called Thanksgiving.

What? You say that’s not the way it happened? Fine. Have it your way.

What actually happened was some Native Americans saved this group of white interlopers from starving, and in return the pilgrims stole their land and gave them smallpox. To commemorate this event, every November Americans participate in a mass genocide of innocent birds.

See, my version is better, right?

Actually, I created this recipe because I always feel I have to have acorn squash at least once each fall – otherwise it just doesn’t feel like Autumn!

In the American South acorn squash is usually smothered in honey, brown sugar, molasses, maple syrup, or agave nectar. But I prefer savory, not sweet, foods. And I’m always putting a twist on American foods to make them more appealing to my Indian partner. Acorn squash seemed perfect for a Desi makeover.

This baked squash still has the familiar “butter,” apples, raisins, and nuts. But now it’s salty as well as sweet, with a touch of garlic, a complexity of spices, and even a dash of heat. Serve it as a main with a cup of soup or chili.

Carefully cut the squash in half lengthwise (stem to tip). A serrated knife works well for this. It’s hard to get it even, so you may wind up with one half that’s a little bigger than the other, like I did. That’s fine – don’t worry about it!

With a spoon, remove all seeds and strings.

Fill a baking dish with about 1/4 inch water. (Depending on the size of the squash, you may need to use a large baking dish or even two baking dishes). Place the squash in the baking dish, cut side down. Place in oven and bake for 30 minutes. 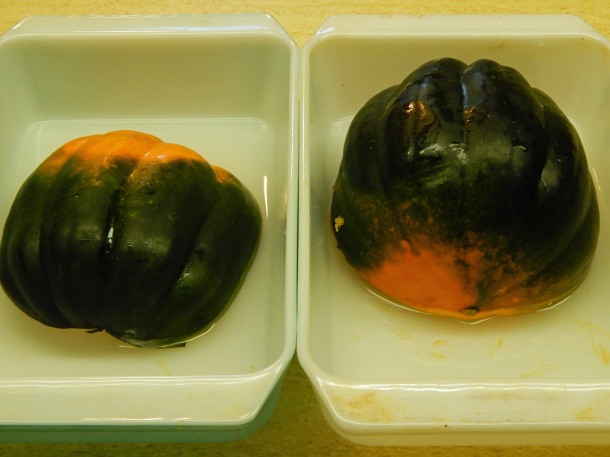 While the squash is baking, chop the apple and then toss with lemon juice to prevent discoloration. Add raisins and 1/2 teaspoon garam masala and toss again.

After 30 minutes, remove squash and flip the sides over. Spear a chunk of Earth Balance on the end of a fork and rub over the yellow flesh – as much or as little as you want.

Sprinkle the squash lightly with the garlic salt. 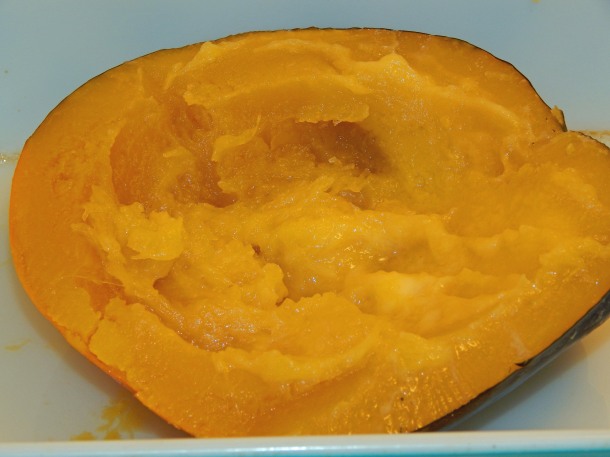 Fill the hollows of the squash with the fruit mixture.

Carefully, sprinkle the cayenne pepper evenly over the entire squash (fruit and all). Then take a tiny “pinch” of garam masala and sprinkle that over the squash as well. I like my food quite spicy, but most of you will probably prefer only a light dusting. 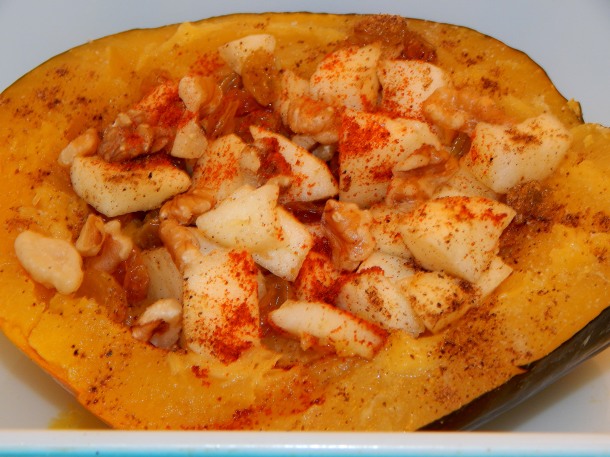 Place back in the oven for 15 minutes.

Garam masala is an Indian spice blend with (among other spices) cloves, cinnamon, cardamom, nutmeg, and mace – all perfect matches for acorn squash. It is completely different from curry powder, so don’t try subbing curry powder for the garam masala. If you don’t have an Indian grocery nearby, McCormick’s makes a good one.

I used golden raisins because I consider them more traditionally Indian, but regular raisins will work just as well. Dried cranberries might also be a tasty option (although, if you use unsweetened dried cranberries, you will probably need to add a spoonful of unrefined sugar to the fruit mix).

If you have a gentle palate that cannot tolerate much heat, try a sprinkle of paprika instead of cayenne pepper.

Don’t forget to save the squash seeds – you can toast them just like you can pumpkin seeds.