But what if you want something that is … a little less traditional?

Something maybe a bit edgier?

Or a mix of classic and modern?

Like … oh, maybe tamales. With a side of green bean casserole.

Or a tart or a quiche for your main, with a whoopie pie for dessert.

Eco-Licious has got you covered.

This year, Eco-Licious has partnered with five (!) of Charlotte, NC’s top vegan companies for Thanksgiving pre-orders.

Fun fact about the Masa Casa!

At their debut at the 2014 Charlotte VegFest, several festival goers/blog readers were so convinced the Masa Casa’s “cheeze” was real they wrote to me venting they’d been “tricked” into eating dairy!

Side dishes are being offered by Nourish – Green Bean Casserole, Brussels Sprouts Au Gratin, Thanksgiving Candied Potato Salad, and Gravy. The Ethical Vegan is also offering a side of sourdough and sausage dressing with apples, pecans, and raisins.

The Naked Tart is offering four flavors of tarts – two “classic” flavors – Pecan or Sweet Potato, and two other flavors – Lemon and Chocolate.

You can start preordering NOW; I’ll have to check with my contact to determine the exact cutoff date/pickup times.

While Bean is making waves for being the first “full” vegan grocery store in Charlotte, Eco-Licious has been selling a selection of vegan groceries, vegan personal care products, and eco-conscious gifts for several years!

So while you’re there picking up (or placing) your order, take some time to stroll around, pick up a few vegan goodies, and – maybe – get a head start on your Christmas shopping?!! 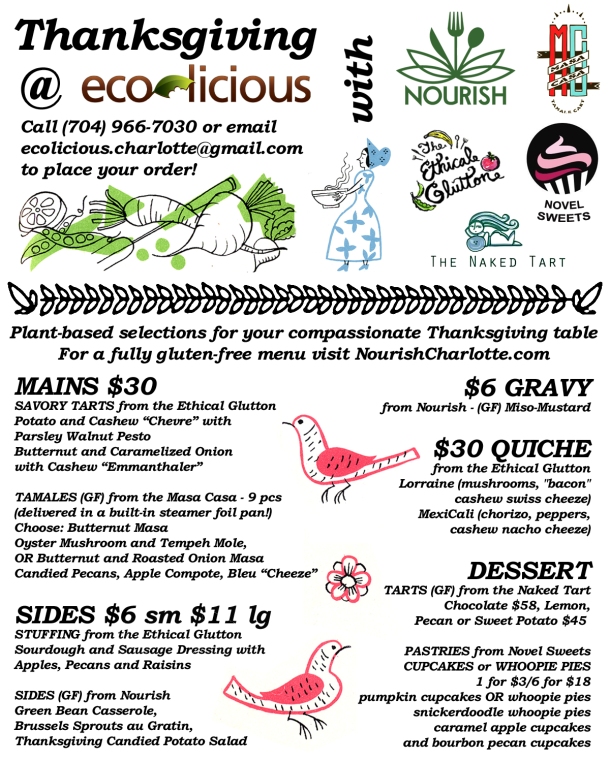 Next up in our series: An EXCLUSIVE sneak peak at Nourish’s Thanksgiving menu!