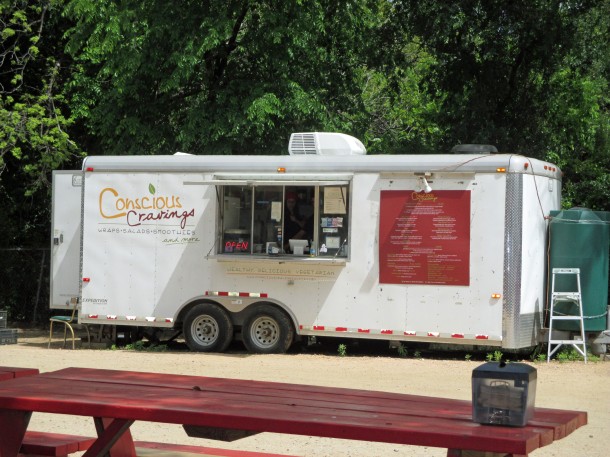 I was excited to try Conscious Cravings in Austin, TX.

Yelp was full of positive, glowing reviews – although admittedly Yelp is notorious for deleting any reviews that are less than positive.

And the concept seemed cool – a food truck specializing in vegan wraps. Everything from tofu to seitan, from Indian chickpeas to black beans, to old standbys like avocado wraps and portabello mushroom wraps. Menu items can also be served on a salad with quinoa, and an assortment of smoothies is also offered.

There are two Conscious Cravings located in Austin. We visited the one at South Austin Trailer Park & Eatery.

South Austin Trailer Park & Eatery is a collection of several food trucks (Conscious Cravings, Holy Cacao, and Torchy’s Tacos) surrounded by picnic tables under trees. There’s also a covered club-like shelter for cold or cloudy days. It was a beautiful spring day, however, so we did not mind sitting outside.

So that’s the good I have to say about Conscious Cravings. It’s vegan, it has a good menu concept, and it’s located in a fun outdoors setting.

Service was rude. The young man working the window was clearly completely bored to be there and annoyed at the necessity of having to stop texting for a few minutes to take our order. I hate arrogant service anywhere, but especially at vegan places. We had to put up with it (as we didn’t have too many other dining options, especially at that time of day) but an omnivore would have headed straight to Torchy’s Tacos.

We had to wait a long time for our food – 25 minutes. That’s a bit excessive for two wraps and an order of fries from a food truck.

Our order was mislabeled. I ordered the chimichurri seitan, my partner ordered the BBQ seitan. Since they were wraps, we couldn’t tell until we bit into them that the wrap labeled chimichurri was BBQ and the wrap labeled BBQ had the chimichurri sauce. Since I was dining with my partner it was not a big deal for us to switch wraps, BUT … I sometimes dine with people I don’t want to swap spit with. And had there been other customers besides the two of us … would we have wound up with someone else’s food?

The house-made seitan was good, but the wraps had too much sauce. It went beyond use-a-dozen-napkins-to-eat-this. By the time we were halfway through, the wraps were a soggy, disintegrating mess. (Keep in mind we ate our wraps immediately, in the picnic area – we weren’t picking them up as to-go food to eat later.)

My saucy Chimichurri Seitan wrap. It had a little BBQ sauce in addition to the green chimichurri – perhaps one reason it was so wet and gloopy!

And finally, the rosemary fries. I will say fresh rosemary is an excellent addition to french fries. I will also say that if you picked up a package of Ore-Ida shoestring fries, added fresh rosemary, and baked them about five minutes too little, you’d wind up with something remarkably similar. One order was large enough for the two of us to split.

Rosemary Fries. A few were burnt; the rest were undercooked.

So … would I recommend this?

Vegans:  Since options are limited, might as well try it, especially if you’re looking for food after a hike in nearby Zilker Metropolitan Park. You might luck out with different people working the food truck – I am sure our food would have been better if prepared by someone who gave half a d*mn.

Vegetarians: Ehhh. While we had a hard time locating vegan food in Austin, vegetarian food is everywhere! If you’re starving, try it; if not, know you can find lots of other options.

Omnivores: No. I’d hate for this to be anyone’s first vegan experience.