Ravioli Soup With Spinach and Tomatoes

Tortellini Soup was one of the first vegetarian meals I learned to cook, and it remained a staple for some years.

It was EASY – very important because I didn’t really know how to cook at the time, other than a few totally random things like pimento cheese and chocolate cake.

It was FAST – also very important because not only did I not know how to cook, I didn’t like to cook. I was in my early 20’s and I had better things to do with my time than spend it in a kitchen!

And, it was DELICIOUS – rich, cheese-filled tortellini surrounded by spinach and tomatoes in a light, garlicky broth.

Years passed, and eventually, I became vegan. I tried to recreate this soup, replacing the tortellini with regular pasta and cannellini beans, but It. Wasn’t. The. Same. Sadly, I retired the recipe card.

owever, several vegan raviolis have come on the market, including Rising Moon Organics (available at Earth Fare in Charlotte, among other places).

So once again I can have my soup and eat it, too (although now it’s Ravioli Soup instead of Tortellini Soup).

These days I am an accomplished cook and love spending time in the kitchen. (Hey, I’m not in my early 20’s anymore – these days I often DON’T have anything better to do with my time than hanging out in the kitchen).

Still, there are those 10-hour workdays when I come home wilted and it’s nice to be able to fling things into a pot and have dinner less than 30 minutes later.

I also feel rather virtuous when I make it – I’m eating a real, hot meal with spinach and tomatoes instead of a frozen veggie burger! 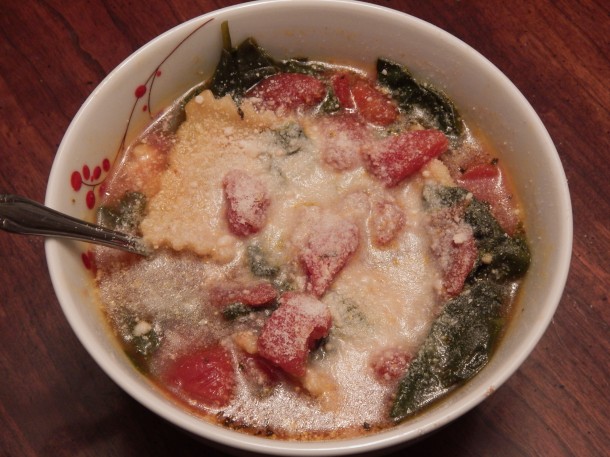 Ingredients for Ravioli Soup With Spinach and Tomatoes:

1 Can Diced Tomatoes (With Garlic, Basil, and Oregano or Italian-Style)

Heat the olive oil in a large soup pan over medium-high heat. Add the garlic and saute one minute.

Add the broth and ravioli. Bring to a boil, then reduce heat and simmer for 1-2 minutes longer than package directions. (Since this is a soup and you’ll be cutting the ravioli with your spoon, you want the pasta a little bit softer than if you were just serving it with sauce).

Add the tomatoes and basil. Add an optional splash of red wine – about a tablespoon. Stir in the spinach. Simmer about 2 more minutes, or until the spinach is wilted and the ravioli is soft and pillowy.

Ladle into bowls and, if desired, sprinkle with parmesan cheese or nutritional yeast.

To make this even faster, use jarred, refrigerated minced garlic and pre-washed spinach.

Fresh spinach is better, but frozen spinach will also work (and is often more economical). I’ve made it in the winter using several cups of frozen chopped spinach, which makes a thicker, heartier broth. Thaw the spinach in the microwave and drain before adding to soup.

I always use Swanson’s Vegetable Broth, because that’s the only brand that was available in the dark ages when I first started making this soup, and I’m used to the way it makes this soup taste. Use your favorite, however.

Pasta still a bit al dente? Just take your kitchen shears and snip the pasta right in the pot.