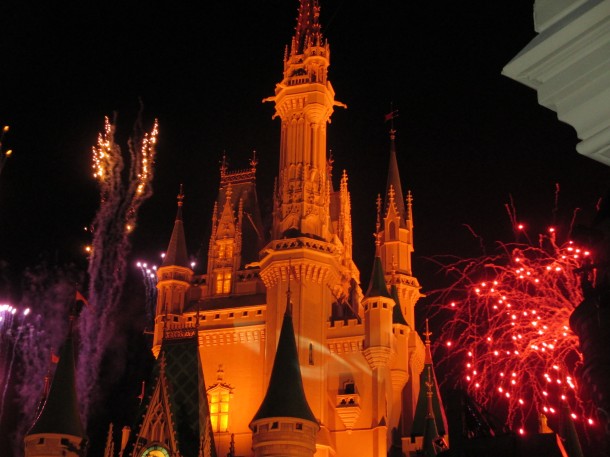 The answer, as I found out on my recent visit to Walt Disney World – Orlando, FL, is … It’s complicated.

There is certainly vegan food to eat, but your choices are limited. However, that’s not as bad as it sounds, because EVERYONE’S choices are somewhat limited. To deal with massive crowds efficiently, most quick-service places and restaurants have a limited number of entrees – six seems to be the norm. Of those six, one might be meatless.

On the positive side, Disney prices their meatless entrees cheaper than their meat entrees – as they should! And if you see something that could be customized by leaving off the meat, they’ll knock a dollar or two off.

And, most of their “street snacks” are vegan!

Before I post any specific reviews or details of my vegan Walt Disney trip, it helps to understand how the food works at Disney.

As the name implies, these are restaurants where you can get your food quickly (usually!) You don’t need a reservation and prices are much cheaper than Disney’s full service restaurants. You walk in, place your order with one person, then walk to the counter where the counter boy or girl brings you the order when the kitchen crew shoots it out. Then you grab your napkins, condiments, plastic ware and (hopefully) find a spot to sit and eat.

Be warned. It’s called the Magic Kingdom and not the Healthy Kingdom for a reason! The six menu selections at a Quick Service restaurant tend to be something like this: 1. Cheeseburger. 2. Cheese Pizza. 3. Pepperoni Pizza. 4. Fried Chicken Nuggets. 5. Macaroni and Cheese. 6. Salad with Chicken, or Without.

Be prepared to eat a lot of salad, fries, and maybe a child’s Uncrustable with apple slices! 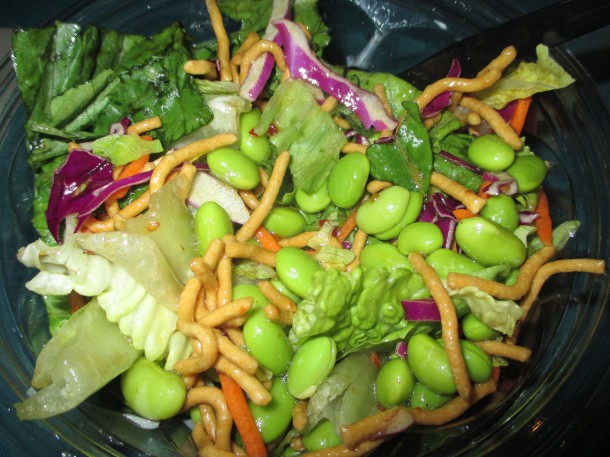 Asian Salad without Chicken from The ABC Commissary at Hollywood Studios

NOTE TO DISNEY: Please offer veggie burgers at your quick service restaurants, which would appeal not only to vegans, vegetarians and reducetarians, but also to omnivores searching for healthier options!

Sit-down restaurants where you order at a table and your food is brought to you. You need a reservation for these (even if the restaurant has availability, you must still book by going online or calling Disney Dining) and the food is considerably more expensive. The upside is, the food is considerably healthier and you have a better shot at finding a decent vegan dish on the menu. I had fantastic meals straight off the menu from Be Our Guest (Magic Kingdom) and Nine Dragons (Epcot), and a friend of mine recommends Liberty Tree Tavern (Magic Kingdom).

Quinoa Salad at Be Our Guest, Magic Kingdom

I’ve also heard that if you make your reservations enough in advance (Jules and I were winging it), you can request a vegan dish be served if there is not one on the menu. I’ve even heard sometimes the chef will come to your table to talk to you. Just be considerate and give advance notice, ’cause these people are BUSY. (Disney recommends informing the restaurant of your special needs two weeks in advance.)

Unless you’re going to a character event, I’d recommend avoiding buffets – the price is steep (one we checked out was $43!) and, let’s face it, there’s not going to be much we can eat. You’ll also probably want to avoid restaurants serving family-style.

Annnnnd a word about Epcot.

Don’t get me wrong, the World Showcase is beautiful and charming, but there seem to be large chunks missing from the world.

For example, where the heck is India?

Perhaps I’m just spoiled because I’m fortunate enough to live in a city that offers diverse ethnic food options – Indian, Thai, Vietnamese – none of which are represented in Epcot. But, although many of the restaurants are quite stunningly beautiful, I didn’t find the food all that interesting or diverse. (This could be because the selections are limited to only a few options to deal with the masses.)

(I have been told there is an Indian restaurant, Sanaa, in the African portion of the Animal Kingdom, which is quite interesting because India is located on the continent of Asia, not Africa. It’s also interesting because you can watch giraffe and zebra play outside the restaurant as you eat – neither are natural species to India.)

Vegans I personally know and trust recommend Morocco at Epcot (several restaurants with Mediterranean options), and advise against France (word is the vegan option at the French restaurants is a plateful of very expensive steamed vegetables).

The gorgeous view at the San Angel Inn, located inside the Mayan pyramid. You can also watch guests taking boat rides as you eat. The ambiance is much better than the food.

Plan a great evening in Epcot. Make reservations for an early dinner, then stand in line for however long it takes to ride Soarin’ Over The World, where you will be “hang gliding” over the Eiffel Tower, the Taj Mahal, and Niagara Falls. Then, stick around to watch the impressive fireworks.

But Epcot isn’t your only option.

We spent our first night in Disney Springs (formerly Downtown Disney) and I really believe vegans, vegetarians, and reducetarians might have a better shot at finding a fulfilling meal there. Perhaps because everything there isn’t “Disney Owned.” I had a vegan veggie burger; I also saw menu boards for other veggie burgers, veggie sandwiches, veggie sausage at B.B. Wolf’s – as well as Blaze Pizza (design your own pizza, offers vegan cheese) and Rainforest Cafe (lots of vegetarian options, plus some vegan ones).

Snacks you can buy on the streets of the parks. Most are vegan!

Mickey Pretzels – without the cheese dipping sauce, of course!

Fresh-Popped Popcorn – the “butter” is artificial diary flavor. (Do not get this confused with the popcorn bags they sell in gift shops on Main Street – most flavors contain dairy.)

Dole Whip – All flavors except Vanilla.

I also came across kiosks selling fruit and frozen lemonade.

Disney supposedly frowns on people bringing their own food to the parks, but they have to allow it if it is a medical or religious issue. They do have lockers you can rent to store a soft-sided cooler in.

BUT! I think the main issue here is they are trying to prevent people from bringing in bags from McDonald’s, KFC, etc.  (Disney has corporate relationships with specific companies) and huge coolers (which are, honestly, obnoxious).

Every day I visited the parks, I had a small, smushable backpack (thanks Jules!) with a bottle of water, a Nak’d fruit-and-nut bar, a strip of Primal jerky, and perhaps a piece of fruit. Security never said one word when my bag was searched. Unless you have a large family, or are a drama queen, I’d highly advise bringing food in the discreet way.

As for your hotel? Be aware most hotels at Disney resorts have small refrigerators but no microwaves. Definitely pack some fruit (a single banana was $1 in my hotel commissary!) and other snacks. Also some small aseptic bottles of soy or almond milk, as my commissary did sell cereal and small bottles of milk, but no milk alternatives. 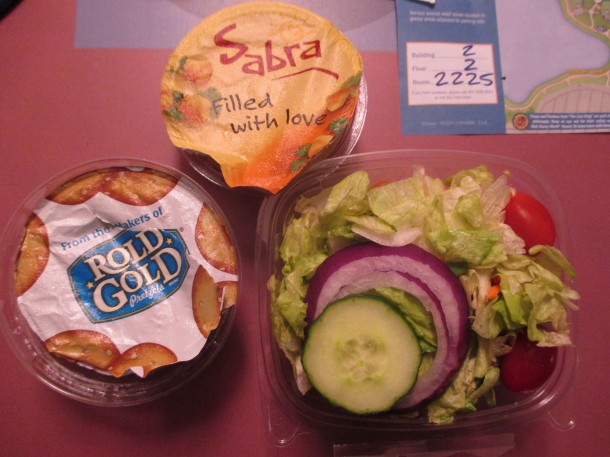 Unless you are trying to get into some restaurants mostly to meet characters,  I don’t think the Disney dining plans are a good deal for vegans. Our choices are already so limited, and they’re already the lowest-priced items on the menu.

The Quick Service Dining Plan ($44.13 per day) includes two quick service/counter meals, one snack (drink or dessert), and one refillable mug (good only at your resort, not in the parks).

As a vegan/vegetarian/reducetarian, you are not going to be able to find many substantial quick service meals, they will both be $12 or less (probably less), your dessert options are mostly limited to fruit, and how much time will you actually be spending at your hotel? $12 + $12 + $3 + Mostly Unused Mug = $27, max. (My actual total from the Friday I was there – $12.99 from Be Our Guest Lunch (it’s quick service at lunch, full service restaurant at night) + $3.29 fries from Pinnochio Village Haus + $3.29 for a Coke = $19.57. Actually, I would not have been able to use my second counter credit, as fries are not an entree, so change the total to $16.28.)

The next tier up is $63.70, for one quick-service meal, one sit-down restaurant meal, one snack (drink or dessert), and one refillable mug. This combination is probably the more likely one for sensible people.

The refillable mug is probably only a good value if you are planning to spend a lot of time at your resort, AND if you drink a lot of Coke.

So take advantage of a dining plan if one is offered as part of your vacation package, but don’t pay extra for it.

Frugal Vegan Tip: Visit Club Cool in Epcot, where you can help yourself to FREE samples of Coke products from around the world. (My favorite was Japan’s VegitaBeta – apricot and passion fruit.) Have several free samples instead of buying yet another $3.29 Coke.

Mickey’s Not So Scary Halloween Party 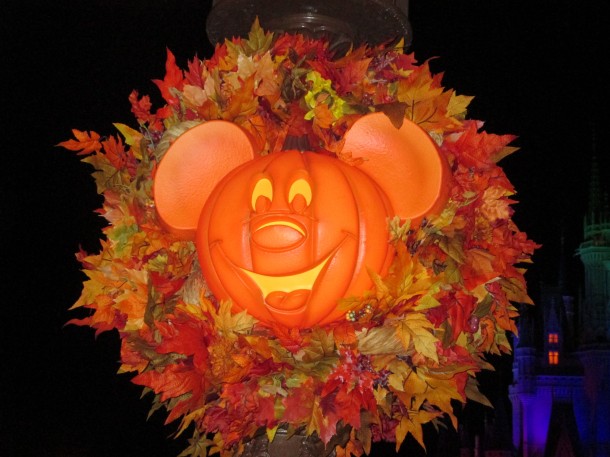 Boo to You! Boo Boo Boo!

It’s not so very scary! A special Halloween edition of fireworks at the Magical Castle followed by a special Halloween parade featuring Disney villians and the residents of The Haunted Mansion. Completely amazing and one of the highlights of my visit.

As for the trick-or-treating, be aware of Disney’s corporate connections. Mars Brands supplies all the candy for this event, so the candy is the same at every trick-or-treating station – M&Ms, Dove, Milky Way, Snickers – and Skittles! I wound up with a bag full of Skittles!

Have a magical day!

Whatever you do, don’t take brunch at The Hollywood Tower Hotel. To say service is slow is an understatement.