“It was a beautiful, bright Autumn day, with air like cider and a sky so blue you could drown in it.” – Diana Gabaldon, Outlander

The seasons are transitioning.

In Charlotte, it’s subtle. Daytime temps are still in the 80’s. Leaves are still green.

But the humidity has eased. Nights are longer and cooler. The skies are blue again. Crows are back – where do they come from, each year? And so are spiders. The Scruff Muffin and I see their bejeweled webs on our morning walks, sparkling with dew in the early morning light.

My taste in food is changing as well. In the summer it’s all fresh fruit, smoothies, fruit and yogurt parfaits. Cold sandwiches and fresh salads. Chilled potato salad and pasta salads. Ice cream.

Now I find myself wanting – food a little more substantial. A little warmer. A little spicier. I’m not quite ready for a big bowl of spicy chili and cornbread – at least not until the daytime temps drop below 70. (Which might happen October 13th!)

So instead of summertime chilled quinoa salad served in avocado halves, I find myself wanting this spicy, Indian-inspired quinoa salad, served steaming from the pan!

This is also delicious with red kidney beans, so choose your favorite!

1 15 oz. Can Chickpeas or  Red Kidney Beans, rinsed and drained

Sort and rinse quinoa in several washes of water (just like you would rice) and set aside.

Add the quinoa and stir only enough so that the quinoa and onion masala is mixed, then add two cups water. Add salt. Bring to a boil, then reduce heat, cover and simmer for five minutes less than directed on package. For example, usually the cooking time is 15 minutes, so you would simmer for 10 minutes. 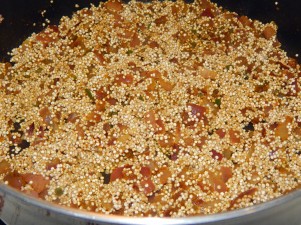 At that point, add the cherry tomatoes. Stir. Add the fresh spinach. This will initially seem like too much spinach, but don’t worry – it wilts quickly. Just carefully spoon quinoa from the bottom of the pan and place on top of the spinach, until the spinach wilts and you can fit all the spinach in the skillet. 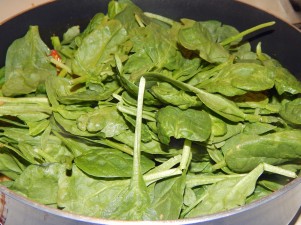 And gently mix as it wilts.

Re-cover the skillet and continue cooking for the remaining five minutes, or until water is absorbed. You should be able to see the “ring” around the quinoa but the quinoa should not be “popped.” Remove from heat and serve warm.

As always, use your best judgement with hot peppers. You know how much heat you can handle! Adjust up or down if you need to! In this recipe I aimed for a medium level of heat.

Quinoa is very delicate, and flavors intensify greatly overnight in the fridge – especially peppers and garlic! So if you think you’ll have lots of leftovers – if you’re cooking for one or two instead of four – go with a smaller amount of peppers and one instead of two cloves of garlic.

Finally, as any good October meal should be, it’s best served hot or warm – although it’s also good at room temperature. If you have leftovers to refrigerate, gently heat before serving – do not serve cold.

How about you? Do you find yourself eating differently now that the seasons are changing? Do you also have “transition foods” you turn to while Summer is taking her time moving on and Autumn is moving in ever so slowly?