It was a gray, rainy day in Charlotte, NC.  A perfect time to announce the 2013 VegCharlotte Awards Winners in the Soup Category!

And by a wide margin, the winner is … Berrybrook Farm Natural Foods!

Berrybrook Farm is the kind of place that’s easy to overlook.  From the outside it just looks like a health food store, and a small one at that.  Inside, it’s packed with as much merchandise as it can hold.  It also has a nice little carry-out “juice bar,” which, in addition to juices and smoothies, also has salads, sandwiches, and yes – soups.  Everything at the juice bar is vegetarian and much of it is vegan – or could easily be modified to be vegan.

Here’s what Charlotte, NC vegans and vegetarians had to say:

“They are so creative with their soups and there is so much variety!”

“The staff is so friendly!”

“I’ve been getting soup here for years!”

A couple of the more exotic soup mentions by voters …

A number of votes for the soups at Woodlands Pure Vegetarian Indian Cuisine – $3.50 – $5.00.  “I love these – especially with a dosa!”  “Whatever else I’m ordering, I always order soup as an appetizer.”

And a vote for Fern, Flavors From The Garden’s Drew’s Signature Ramen Bowl – Fried Seaweed.  Tofu.  Dashi.  Shitake Mushrooms.  Zucchini Noodles.  Coconut Froth – $13.   The menu item doesn’t have the Fern frond vegan symbol next to it, though, so it might be vegetarian not vegan.  Or it could be a misprint.

One person voted for Panera Bread’s Tomato Basil Soup in Sourdough Bread Bowl – “Yum!”  Looking at Panera’s website menu, though, this soup is not listed – perhaps it’s a new addition, a seasonal item, or maybe it’s been discontinued?  Currently, Panera’s vegetarian soups are Creamy Tomato with Croutons and Low Fat Garden Vegetable with Pesto.  Their only vegan soup is the Low Fat Vegetarian Black Bean.  (And while we’re talking about chains, at Jason’s Deli the only vegan soup is Organic Vegetable; French Onion Soup and Tomato Basil are vegetarian.  Beware – NONE of the soups at McAlister’s Deli are are vegetarian, much less vegan – unless you count their vegan veggie chili as a soup.)

A number of vegans, instead of placing a soup vote, expressed concern that they did not know where to find vegan soups in Charlotte, NC.  Understandable, since the mainstream restaurants in Charlotte tend to be meat-broth obsessed.

Many Charlotte vegans and vegetarians therefore apparently choose to avoid soup altogether, rather than take a risk with the broth.

“IS there such a thing as vegan soup in Charlotte?”

“The only vegan soup I know of in Charlotte is the soup I make myself.”

So, I am going to give you a few more suggestions on where to find vegetarian and vegan soups in Charlotte.  No doubt some of these will make next year’s VegCharlotte Awards – once vegans and vegetarians find out about them!

Amelie’s French Bakery.  Amelie’s offers several housemade soups daily, including at least one vegan option.  (Kind of odd since Amelie’s sells primarily desserts and pastries, none of which have been vegan on my visits).  Vegan soups include tomato fennel; carrot, ginger, and wild rice; and gazpacho.  Vegetarian soups include sweet potato bisque, pumpkin bisque, and vichyssoise.  They may also occasionally have other flavors.  Cup $3.59, bowl $5.59, to-go quart $10.49.  Funky NoDa atmosphere.

Bean Vegan Cuisine.  I can’t believe Bean’s soups didn’t get nominated.  That could be because soup is a fairly recent addition at Bean, and it’s not listed on the menu – it’s part of their daily specials.  So make sure you check their board when you walk in and/or listen carefully to your waitperson!  Bean has chili every day and rotates in a weekly soup special.  Creamy Potato is one of their most popular, and they’ve also done a Seitan Stew, Split Pea, Italian Wedding Soup, and an Acorn Squash Curry.  (The Acorn Squash Curry was AWESOME.)  They’re also working on some “cheesy” soup recipes.

Bean’s popular Seitan Stew, with a side of Acorn Squash (Photo Credit: Bean)

The Common Market.  It’s hard for me to believe The Common Market’s soups were overlooked as well.  They always have at least one vegan or vegetarian soup, often more.  Friday, for example, out of five soups two were vegan (Sweet Tater Bisque and White Bean & Spinach) and two were vegetarian (Thai Coconut Vegetable, Creamy Roasted Zucchini & Portobella).  Soup specials are posted daily on their Facebook page.  $1.99 for 8 oz., $3.99 for 16 oz.

Nourish – Ok, this is a vegan meal delivery service.  But it is awesome.  They offer two soups each week, amazingly creative, I don’t think I’ve seen them repeat themselves yet.  Last week’s soups were Golden Lentil Stew with Roasted Veggies and Roasted Corn Winter Tonic.  The week before they had Potlikker Stew with Greens and Beans and Classic Borscht with Dill “Sour Cream.”  Occasionally you can find one of their soups at Eco-Licious or Simply Local.  Here’s their Facebook page so you can have access to their weekly menus – be warned, they sell out pretty fast. 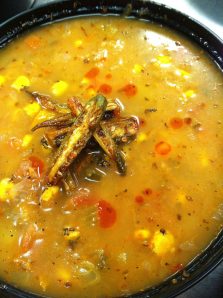