This vegan Philly Steak Sandwich is a tribute to my dad. My parents divorced when I was very young.  My dad wanted to remain a major part of my life so, in addition to other time spent with me, we developed a routine of having lunch or dinner together once a week.

In my preteens and teens, we dined at now forgotten restaurants like Tuesday’s (Est. 1865 – Unique Dining in 19th Century Decor!) at the now-demolished Eastland Mall.  I think I liked the art deco atmosphere (the Tiffany lamps, the Alphonse Mucha posters) as much as the food!

In my twenties, we lunched at Bennigan’s, which was conveniently located beside the real estate agency I worked for. (Both Bennigan’s and that real estate office are long, long gone as well).

These places were known for “gourmet” sandwiches, and I wasn’t veg in my teens and twenties.  So my lunch of choice was nearly always a Reuben (sold at Tuesdays for $2.25!) or some sort of a French Dip, grinder, or Philly Cheese Steak, preferably loaded with grilled onions, peppers, and mushrooms.

So, this Saturday when I found myself hanging out in the kitchen with seitan, I knew EXACTLY what I wanted to make.

1 package Upton’s Naturals Traditional Seitan (This comes in chunks suitable for a stew or stir-fry; for this sandwich I sliced it into smaller, thinner bites with a kitchen shears.)

1/2 Teaspoon Sea Salt, or to taste

Preheat the oven to 425 and prep your veggies!  Once you start cooking everything gets thrown in the skillet rather quickly, so go ahead and slice all your veggies now.

Add the mushrooms, green peppers, Worcestershire sauce, red wine, and veggie broth.  Cook for about ten minutes, stirring occasionally, until the mushrooms have “shrunk” and most of the cooking liquid has evaporated. Taste; add salt if needed and a good grinding of fresh black pepper.

Take the hoagie buns and “hollow out” the thickest part of the bun to make room for the seitan mixture.

Slather half of the bun with Vegenaise. (You’ll want to be generous; Vegenaise, when heated, actually becomes a little “cheesy.”)  Then, using a slotted spoon to drain extra liquid (so your sandwiches won’t be soggy), fill the hoagie buns with the seitan mixture. 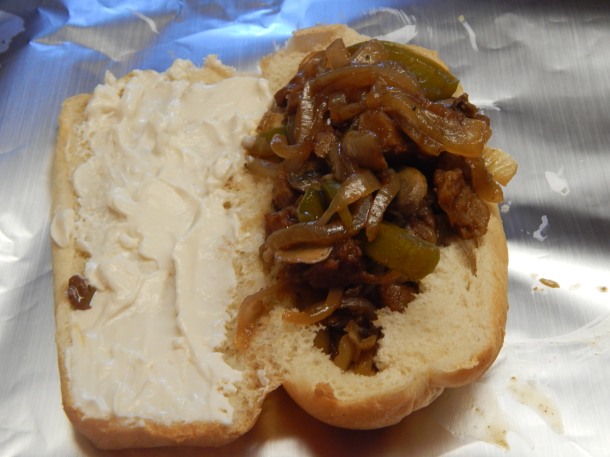 Wrap in aluminum foil and bake in the oven for 15 minutes. 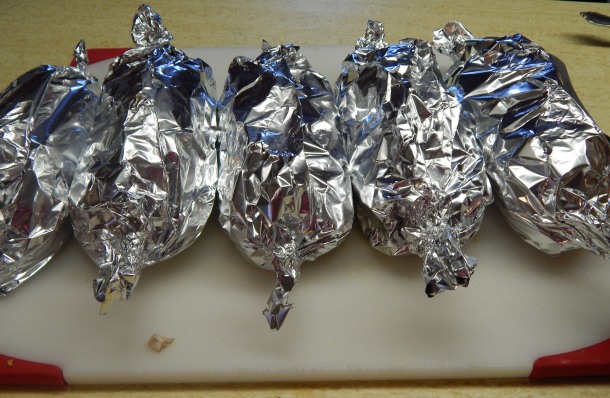 The “cheeselike” substance you see in this photo is actually Vegenaise – it solidifies somewhat when heated and gives you that “cheesy” mouthfeel! A little trick I learned from Zizi’s Awesome Vegan To Go.