Home › Living Vegan › A Vegan Summer In The South

A Vegan Summer In The South 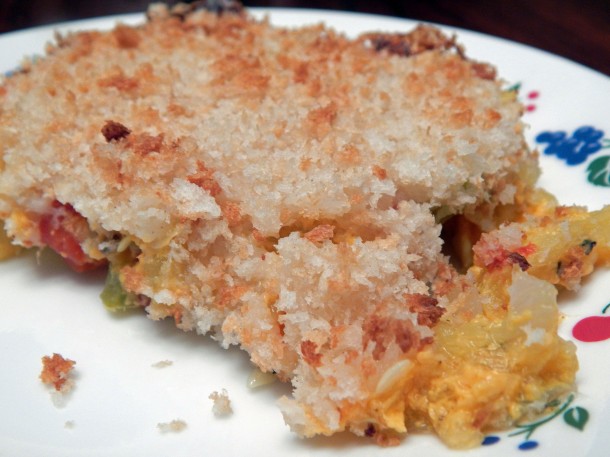 A vegan version of my mama’s Squash Casserole. Growing up in the American South, we ate yellow crookneck squash and zucchini all summer long – and acorn and butternut squash all winter.

Part of the problem, I think, is that the South (like the rest of America) has become more and more accustomed to eating fast food, frozen food, and chain restaurant meals.  We forget about all the glorious Southern foods our mothers, our grandmothers, and great aunts used to cook – the big country breakfasts, the bounty of fresh vegetables, the daily melt-in-your-mouth greens, the jars of homemade jams and pickles.

Real Southern food bears little resemblance to “Cracker Barrels.”  (Where even the corn muffins are seasoned with meat.  Yes.  Seriously.)

Real Southern food also bears faint resemblance to “Paul Deen” cookery.  As my aunties would say, “white trash” might eat that sort of food, but “people of quality” didn’t.  (Incidentally, being a “person of quality” in the South had more to do with your upbringing, your manners, and your grammar than your income, social standing, or skin color).

Here are the biggest misconceptions I have found about Southern cooking:

Southern Food Is Unhealthy.  Would it surprise you to learn than much of Southern cooking is vegetable-based?  Growing up, everyone I knew either had a garden or knew someone with a garden.  The South is hot and has a loooong growing season, so there was always an abundance of fresh tomatoes, corn, squash, okra, cabbages, green beans, cucumbers, radishes, and sweet peas.  Summertime featured many meatless meals, and the “vegetable plate” – consisting of three or four vegetables – was a staple in many diners and lunchtime hotspots.  In the winter we’d have fresh collards (or chard or turnip greens), in addition to winter squashes and sugar pumpkins.  And beans (especially pintos and black eyed peas) showed up on the menu at least twice as often as fried chicken or country-style steak.  This vegan hoppin’ john is a prime example.

Everything is seasoned with pork, bacon, fatback, or “drippin’s”.  Only if you’re eating at Paula Deen’s house.  Personally, I was never invited.  And my family never seasoned their food with pork or bacon grease.  In fact, my family rarely ever ate pork, period – except for those gloriously nasty fast-food sausage gravy biscuits.  Now, some families did use pork for seasoning – but not EVERY family did, and the ones that did, didn’t use pork in EVERYTHING. 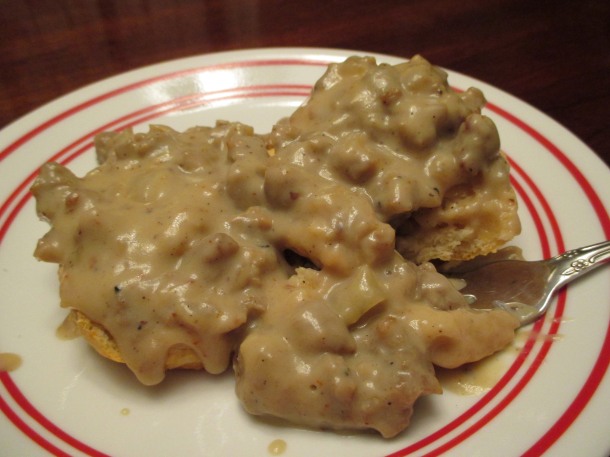 Believe it or not, I rarely ate pork growing up in the South.  Sausage Gravy Biscuits were a notable exception (my veganized version is shown here).

Southern Food is Bland and Boring.  Southern Food has heavy African and Creole (French) influences, and to a lesser extent Mexican as well.  That makes for an interesting cuisine!  Also, most of us down here like it hot.  Jalapeno Peppers are a popular backyard crop.  And, visit any small Southern diner along the highway.  On every table you will see a bottle of Tobasco hot sauce and another of Texas Pete.  We use those two little bottles to season everything from grits to greens.

Southern Food is All About Sweet Tea and Sweet Cornbread.  Bless your heart, sugar!  We drink lots of things besides sweet tea – such as moonshine and Cheerwine!  (Just joking with you – these days it’s craft beer and Cherry Coke).  But. Cornbread. Is. Never. Sweet. (Although, it frequently has jalapenos – as does this cornbread with turnip greens and hot peppers baked right in.)

So!  Now that I’ve dispelled a few myths, I want to celebrate these glorious vegetable and fruit-filled days of summer by sharing with you some of my family’s recipes and the few great Southern cookbooks I’ve found.

I’m lucky enough that, when I took over cooking from my disabled mom, I had access to all of her handwritten recipe cards, her recipe pullouts from various magazines, some typewritten recipes from my great aunts, and several of my mom’s cookbooks (ranging from Betty Crocker’s New Good And Easy … yes, the same cookbook I love to make read for laughs… to Five Ingredients or Less to In The Kitchen With Rosie).

This summer, I’ll be going through my mama’s and my great aunts’ recipes. I’ll be paging through the cookbooks my mama once used, re-discovering the recipes she put multiple check marks by, interpreting the notes in the margins. And hopefully being able to interpret most of the recipes into really yummy vegan versions.

If you haven’t already … Now is a good time to ask your mother (or your father, as the case might be) for access to their recipe files.  See what family favorites you can revisit and veganize.

No files?  Then ask to borrow their cookbooks, and if for some reason that’s not an option … well, if you can remember what cookbook your parents used while you were growing up … order one of those!  (That means, if they used the red checkered Better Homes & Gardens Cookbook … do not order the 2014 version … order the 1974, or 1984 version.  Check used sellers on Amazon and of course Ebay).