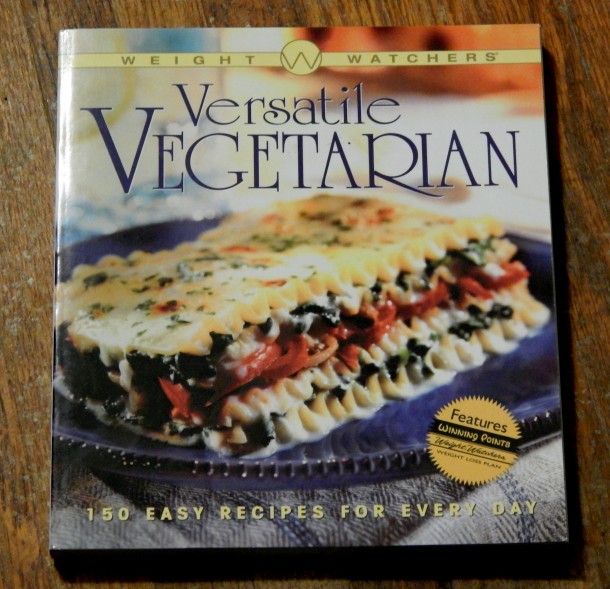 Once upon a time, eating vegan almost automatically equated to eating low-fat, low-cal, and healthy.

So, to start the year and help with New Year Resolutions, I am reviewing several low-fat, low-cal veg cookbooks. The first in the series was Happy Herbivore Light & Lean.

First, don’t be turned off the name. While some vegetarian cookbooks are mostly eggs and cheese (the Moosewood cookbooks come to mind), about 75% of the recipes in this cookbook are vegan. And most of the ones that aren’t can be easily “veganized” by leaving off the cheese, or substituting Daiya cheese or perhaps a spoonful of nutritional yeast. There are only a few recipes that would be difficult to veganize (including the lasagna pictured on the front of the cookbook).

Very complete nutritional information. Perhaps you are diabetic or borderline diabetic and tracking  your food exchanges. Each recipe breaks those down (i.e., 1 bread, 1 fruit/vegetable, 1 fat). Following the Weight Watchers plan? The book gives you points for each recipe. And, finally, for the rest of us, you get a breakdown of calories, total fat, saturated fat, cholesterol, sodium, carbohydrates, fiber, protein, and calcium.

Recipes are simple, but not too simple. For example, fresh onion and garlic are used, not onion and garlic powder. A variety of individual spices are used – both dried and fresh – instead of, for example, “Italian Spice Blend.” You make your own salad dressings for salads instead of relying on bottled.

Emphasis on beans, grains, and veggies. No fake meats, and only a few recipes with soy (tofu or tempeh).

Ingredients are, for the most part, very “normal.” Intermediate cooks probably have most of the dried spices and pantry ingredients already. Beginning cooks might need to make a few stops at the supermarket, but the majority of ingredients should be easy to find.

It’s an older book (2001) which means you can purchase it very inexpensively! Amazon is currently offering lots of copies starting at just a few cents + $3.99 shipping.

No pictures. (Keep in mind this was published in 2001, though, when pictures in a cookbook were not the norm!)

Apparently, since publication Weight Watchers has either converted to, or added, a new Points system. I’ve heard it’s not difficult to convert the values; however, I don’t know much about the WW program so if that is a concern you may want to Google for more information first.

There are some non-vegan recipes in the book, which may be upsetting for some vegans.