“Listen! The wind is rising, and the air is wild with leaves … We have had our Summer Evenings, now for October Eves!” – Humbert Wolf

And making soup, as my Great Aunt Martha always said, is therapeutic. It’s comforting to putter around a warm stove on an Autumn day. It’s a chance to express your creativity – you can add a little more of this, a little less of that, depending on your mood and how you are feeling that particular day. Soup makes your whole house smell delicious.

And, soup is a great way to sneak in some green veggies! Who doesn’t love a cup of “cream of …” soup?

Such as this lentil and spinach soup – an Indian version of “cream of spinach”.

Except there’s no cream, and no butter.

The red lentils make it creamy, substantial, and filling while adding a little kick of protein.

The warm garam masala spice blend is a sophisticated but logical step up from the usual “cream of spinach” spices of nutmeg, allspice, and red pepper flakes.

And of course there’s lots of spinach, which gives this soup a beautiful emerald green color.

You could serve this soup on St. Patrick’s Day.

Or you could serve this at Halloween, in black bowls, and call it Swamp Soup. Or Slime Soup. Or Ectoplasm Soup. Or Snot Soup … well, you get the idea.

I’ve been experimenting with this soup for awhile, and this milder version is – surprisingly – my favorite. (I say surprisingly because usually I am all about the garlic, the ginger, and the peppers!) But in this case subtle works. The lentils and spinach really don’t need much more than some onions, a wee bit of garlic,  and garam masala to shine. 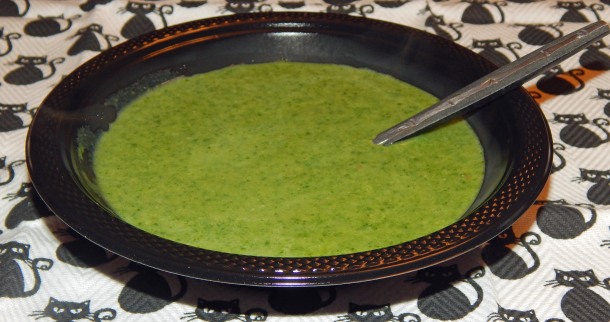 2-3 Serrano Chili Peppers, diced (or 2-3 Thai green chilis, if you can find them)

Add the rinsed and sorted lentils, the diced potato, the sea salt, and 4 cups of water to a large pot. (You can also add 1/2 teaspoon turmeric for taste, but be warned – your soup might turn more of a muddy green color and less of a vibrant emerald.) Bring to a boil, then cover and reduce heat. Simmer for 20 minutes.

While the lentils and potatoes simmer, heat the canola oil in a large skillet. Add the onions and peppers and cook, stirring occasionally, about 10 minutes or until the onion starts to brown. Add the garlic and cook another 2-3 minutes. Add the Roma tomato and cook until the tomato becomes soft. Add the cumin, if using, and the garam masala. Quickly stir around the pan to mix – be careful not to let the spices burn. Remove from heat.

Once spinach has wilted, it’s time to blend. You can use an immersion blender (be careful if you have nonstick pots) or you can run it through a standard blender in batches.

You should now have a very thick soup. Add your favorite unsweetened cooking “milk” until the soup reaches the desired consistency.  (Sometimes I like this soup a little on the thin side, so I can sip it from a mug.) The milk should cool the soup down to the perfect temperature for serving, but if you need to reheat, keep the heat on low and make sure you don’t let the soup come to a boil.

Serve with wedges of lime or lemon. Do NOT skip the citrus; a small squeeze really enhances the flavor of the spinach and lightens and brightens the soup.

To make a more traditional soup, use 6 cloves of garlic and a 1-inch piece of ginger, grated. You may also want to increase the amount of cumin, peppers, and garam masala you use.

If making this soup for a child (or anyone with a very delicate palate), feel free to omit the cumin. It adds a nice touch but isn’t essential. Also, eliminate the chili peppers and use a grind of fresh black pepper instead. The red lentils and garam masala will still give this an exotic flavor that’s not too big a departure from American cream of spinach soup. 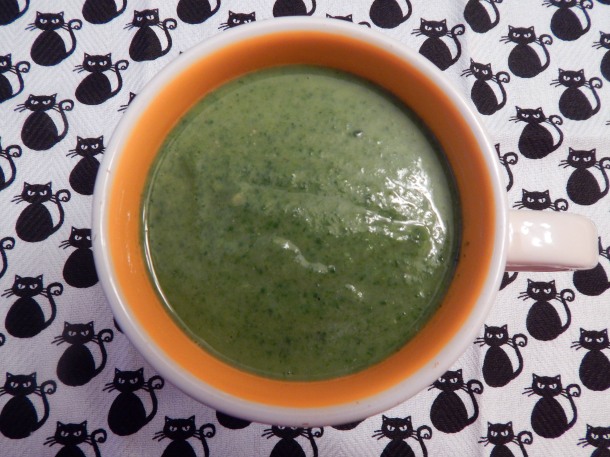