Tupelo Honey is a rock star of a restaurant, one of those that inspires a cult following.  The original is located in Asheville (vegan and vegetarian capital of North Carolina) and offers “Nuveau Southern cuisine.” (Their misspelling, not mine.) Tupelo Honey has seven locations in North Carolina and Tennessee, two cookbooks, and a huge reputation for being very vegetarian and vegan-friendly.

So I was excited when, for the monthly company birthday luncheon, the birthday girls chose the new Tupelo Honey restaurant that opened in Charlotte, NC in December.  It’s in Southend, in the space vacated by the veg-friendly Pewter Rose.

True to its reputation, Tupelo Honey is indeed very vegetarian friendly – especially for those vegetarians who really, really, reeeeeeeeally like cheese.

Vegans have far, far fewer choices.  And, in addition to the cheese and eggs (in the fried foods), we must also watch out for honey, which is a Tupelo Honey trademark.  It appears in an astonishing number of Tupelo Honey dishes – Tepulo Tofu Wings, biscuits, fruit salad, and, I suspect, salad dressings.

There’s not a single vegan appetizer or soup.

There’s salad, of course.  (Poo!)  The Tupelo House Salad ($6.45) is vegan.  The Changing Leaves Spinach Salad ($8.95) and Southern Spring Salad ($8.95) could both be modified to be vegan.  And for $3.75 you can add grilled tofu – a nice option.  The Basil Vinaigrette, Pecan Vinaigrette, and Sesame Orange dressings are all dairy free. However, I would check to make sure the sweeter Pecan Vinaigrette and Sesame Orange dressings don’t contain honey – my server didn’t know for sure.

As far as sandwiches and entrees go, Tupelo Honey does have the ubiquitous vegan black bean burger – the Grateful Dead Burger ($8.95). One might have thought a restaurant with the reputation of Tupelo Honey could have coming up with something a bit more … original than that.  (It may be different in Asheville, but in Charlotte almost every “American” restaurant has a black bean burger as their token vegetarian/vegan option.)  I might have ordered this anyway, except the waitress wasn’t sure if it was vegan or not.  I later determined it was by Googling and finding the recipe for it in the Tupelo Honey cookbook.

The biggest issue was all the sides seriously lacked seasoning, so I wound up using copious amounts of salt and pepper.  But there were other issues …

The Salsa Verde Black Eyed Peas looked and tasted canned.  From the name I was expecting something zesty, perhaps even a little heat. Yet, although I could see a tiny bit of green – the salsa verde – the beans were very, very bland. I suppose I should just be happy Tupelo Honey offered black eyed peas and not the dreaded vegan black beans. 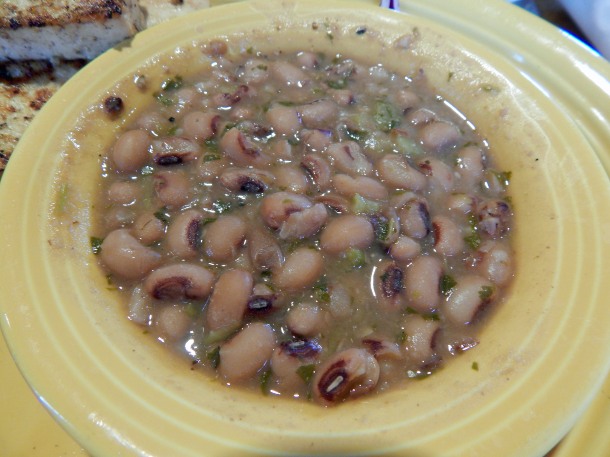 Canned black eyed peas? I suppose I should just be happy they weren’t the mandatory vegan black beans.

New South Sauteed Greens – Also a disappointment.  In part, this may have been because I was expecting what we in the South call “greens” – turnip greens, mustard greens, or collards.  Instead, this side appeared to be under-cooked and under-massaged kale.  Besides needing more cooking, the tough leaves could also have used more seasoning and maybe a splash of balsamic vinegar.  Additionally, they were extremely greasy from whatever oil they were sauteed in.

A few leaves of kale, sparkling with grease.

Grilled Marinated Tofu – This may have been the best of the four sides.  I liked the taste of the marinade and they did a good job of grilling the tofu – a little crispy on the outside and warm and firm on the inside.  Not just soft and raw. However, the tofu was definitely NOT marinated – just brushed with marinade and then grilled.  Had the tofu actually been marinated, so that the inside had a little flavor, this might have been good.  As it was, I wound up smearing some of my basil vinaigrette salad dressing on the tofu. 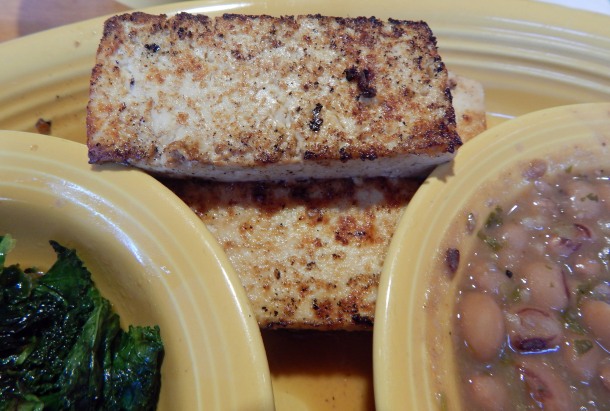 Tupelo House Salad – A salad without much substance.  Two small rings of their “famous” pickled onion.  (If their onions are famous, why not give me a whole slice – or a few more rings, so I can enjoy this signature item?) One lonely grape tomato.  A little bit of shredded carrot, and half a teaspoon sunflower seeds.  Disappointingly, the greens were not baby greens but very large leafs that had not been torn, meaning a knife had to be utilized in the eating of the salad.  Awkward, especially at a table with limited elbow room. 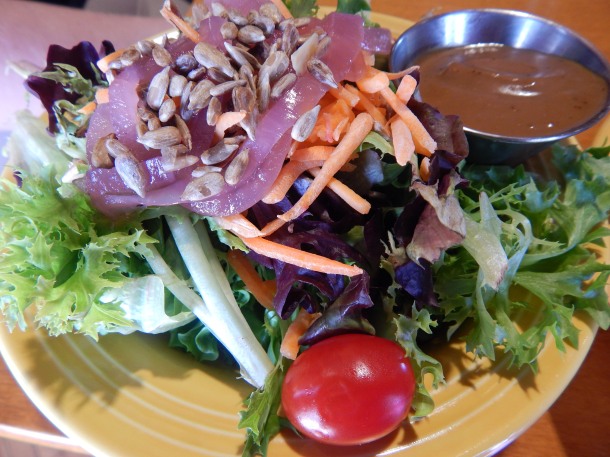 My coworkers?  (All tolerant omnivores, BTW).

One ordered Misse’s Asheville Veggie Melt, which appeared as if half a block of Havarti had been melted on top of it.  I suppose there was a vegetable or two lurking underneath, but I couldn’t see them under that mountain of cheese. Her understated opinion, when asked why she was not eating her sandwich, was “too much cheese.”

Another ordered the Cheesy Onion Bisque and a grilled cheese sandwich.  Her opinion was, “ehh … I was just expecting a bit more.” (Flavor, not quantity.)

And a third coworker was disappointed because “there really wasn’t much to my salad, except greens.”

Those who ordered chicken seemed to like their meal the best, saying the “hormone-free” chicken tasted better than conventional chicken.

Some also said Tupelo Honey does an amazing breakfast, but looking at their menu, I really can’t see anything for a vegan to order.

Ambience:  Very, very yellow (perhaps to harmonize with all the cheese?)

Lots of wood.  Wood walls, wood tables, wood chairs, and rather slippery wood floors.  It felt a bit hard-edged to me.  Perhaps some curtains or cloth napkins instead of paper ones would have helped.

Service?  Service could use some serious improvement.

I knew for at least two weeks beforehand we would be dining here.  I messaged Tupelo Honey on Facebook and their web page inquiring about their vegan options. No response.  Not cool. Not cool at all.

It took over an hour for the waitress to bring our food.  Not an hour from when we sat down, but an hour after we placed our order!

The waitress was not knowledgeable about vegan items and ingredients.  In some restaurants I’m willing to cut the servers some slack, but a restaurant with the veg reputation of Tupelo Honey? Servers should know what is vegan and not vegan, and what items do or do not have honey.

The front desk hostesses were … new or airheads.  I’ll give them the benefit of the doubt and say they were inexperienced.  When our party of nine arrived, they told us they had no large tables and we would have to sit at two tables.  Then one of the hostesses had an “ah-ha!” moment and realized, “We could push several tables together for you.”  Duh.

If you’re vegan, stay away from Tupelo, honey!