By Catherine of VegCharlotte • September 8, 2014

This is an unusual little vegan curry, one you won’t find on the menus of Indian restaurants.  It tastes almost like a beef and potato stew in a rich onion gravy.  Some people prefer it “dry” (without much liquid), to eat with bread. My partner and I prefer it wetter and “soupier,” to ladle over jeera rice.

About 6 Red Potatoes, cut into chunks (One potato more or less won’t hurt anything)

1 cup Nutrela Chunks (find at any Indian grocery, or you can order from Amazon.com)

1 small piece Ginger (about the size of 2 quarters), diced as small as you can

1 tablespoon Sea Salt, or to taste

Wash and peel the potatoes.  Cut into chunks.  With red potatoes, I usually cut the potatoes in half, then half again – 4 chunks per potato.

Rehydrate the Nutrela by placing in a bowl and covering with boiling water.  Let sit for 10 minutes. 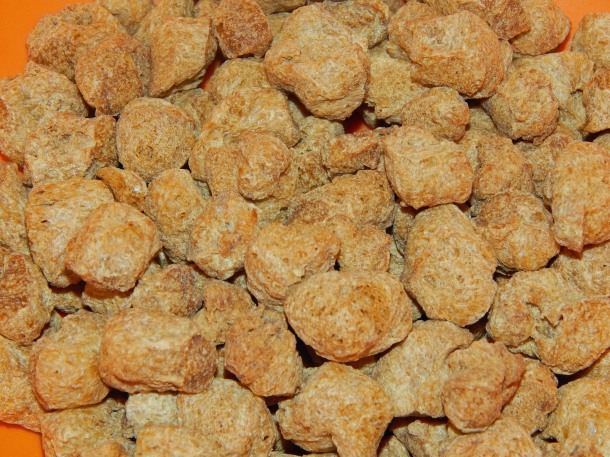 Make the onion masala. In a large skillet, heat the vegetable oil over medium-high heat.  Add the onions and chili peppers and cook, stirring occasionally, for about 10 minutes or until the red onions start to turn pink or the yellow onions begin to be translucent.  Add garlic and ginger and cook for another 2-3 minutes.  Add tomato and cook another 2-3 minutes.

In a pressure cooker, combine the potatoes, Nutrela, and onion masala.  Add about half a pressure cooker water if you want to serve over rice – otherwise, add just enough water to cover the potatoes.  Add turmeric powder (careful, it will stain your clothes) and salt.  Place lid securely on pressure cooker and cook on high heat for one whistle.  Turn off heat and let sit for five minutes.

(If you don’t have a pressure cooker, I’m sure you could cook this in a regular pot on the stove.  Allow plenty of time, though, for the potatoes to get tender – at least 30 minutes. The potatoes should be soft enough to mash with a fork.)

Add the Braggs Liquid Aminos, if using. (This is definitely not a traditional step, but it adds a “beefier” taste to the soy chunks.)

1 tablespoon of salt sounds like a lot, but with the potatoes and soy chunks, salt is needed! You can always add salt a teaspoon at a time.

If you don’t have garam masala (many Americans don’t), try adding two scant teaspoons of curry powder when you add the salt and turmeric. This is definitely non-traditional but can be a tasty alternative.