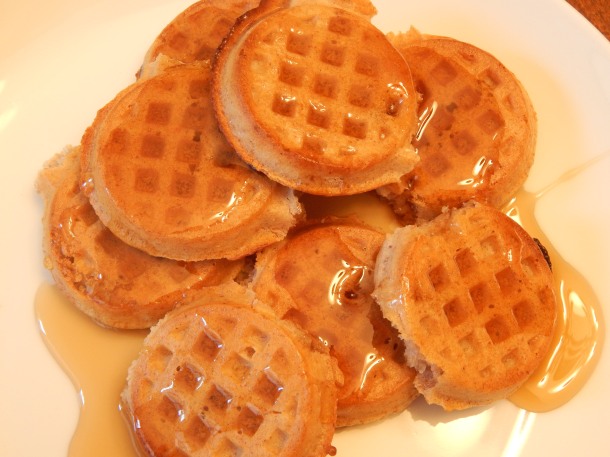 So, as you may know from previous posts, we tend to have pretty big vegan Sunday breakfasts around here.  While I’m perfectly happy eating a plain bowl of Shredded Wheat and almond milk, or simple oatmeal with raisins and cinnamon, my partner prefers – nay, demands! – more elaborate fare.

Here’s our latest find … Whole Foods 365 Everyday Value Organic Waffles.  We discovered these by chance, as the front of the package is not marked “vegan,” “egg free,” or “dairy free.”  Still, we hopefully pulled a package out of the store’s freezer to read the ingredients and discovered that these waffles were happily and unexpectedly vegan!

And they are quite simply the best frozen waffles I’ve ever eaten.  Light and crunchy, yet not hollow and filled with air.  And the taste!  The ones pictured are the 365 Everyday Value Apple Cinnamon Mini Waffles and my favorite; we’ve also had the Blueberry Mini Waffles which were also delicious.  Whole Foods 365 also has full-size, vegan Multigrain and Flaxseed waffles, which we haven’t yet tried.

Before Whole Foods 365 Everyday Value Waffles, the only vegan waffles we’ve been able to find are Van’s Gluten Free Waffles.  These are good – especially the blueberry ones.  However, they definitely require a bit of syrup or preserves. The Whole Foods waffles are so good you could actually eat them, as is.

Although, of course, we don’t. 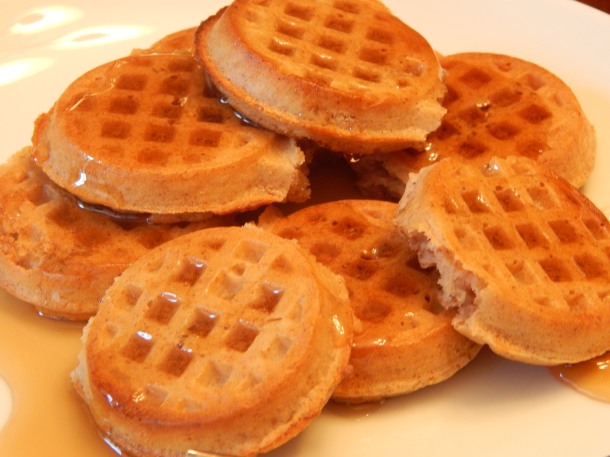