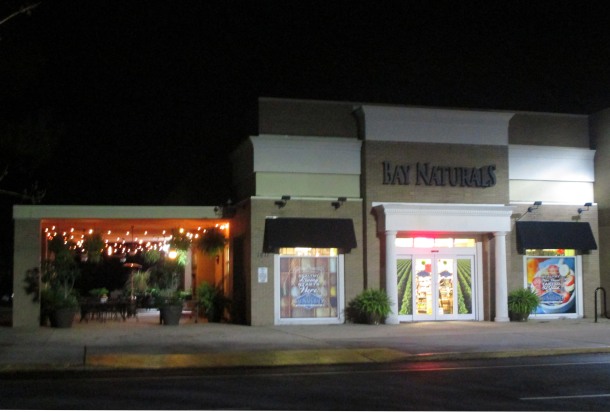 The front part of of the building is, indeed, a healthy market. There you will find all-natural foods (much of it local), nutritional supplements, beauty products, eco-friendly household cleaners, and an alcohol section that features organic, vegan, and gluten-free wines and beers. Bay Naturals does sell some meat and dairy; however the store seems to lean about 75% vegan/vegetarian. Product selection is impressive – from Upton’s Naturals and a number of vegan cheeses to Earth Balance vegan Mac & Cheese.

I roamed the aisles checking prices, and thought they were quite high compared to Charlotte. (Understandable, Bay Naturals is a small, locally-owned store with little, if any, competition.)

So if you’re coming from Charlotte, don’t plan to do your grocery shopping here – buy your vegan groceries in Charlotte and take them with you to the beach. And then maybe just browse the market for something new to try.

On the other hand, if you live somewhere where you have a hard time finding vegan food – perhaps mail ordering many of your essentials? – you may want to take a cooler with you to the beach and stock up.

After we finished browsing the market, we headed to where the action was, the “Healthy Kitchen.”

And it was humming and thrumming!

The lunch counter was crowded with people placing and picking up orders (plus a few people eating).  White-haired senior citizens had commandeered most of the small tables, and every five minutes or so a tattooed twenty-something would pick up a juice or smoothie.

The food is standard lunch counter fare with a vegan twist, done well and with variety.

Sandwiches and Burritos – 20 options, 17 of which are veg, 12 of which are vegan. (I like those odds!) Vegan choices include a breakfast burrito, hummus wraps, cucumber avocado sandwiches, grilled tofu sandwiches, vegan hot dogs and hamburgers, and eggless egg salad. Prices are reasonable, ranging from $3.95 for a PB&J with organic banana to $8.25 for a spinach and cheese quesadilla with three dipping sauces. Most items are in the $6 range. Sandwiches come with a side, and the vegan sides include Cucumber Quinoa Salad and Red Bliss Potato Salad, made with Vegenaise.

Salads – You can add your choice of protein to any salad – Grilled Tofu, Tempeh, Fakin Bacon, or Hummus (original or red pepper).

Juices and Smoothies – These were flying out the door! A long list of juices and smoothies, plus many ways to customize. Example: Vegans can augment their smoothies with Liquid B-12, Peanut Butter, Almond Butter, or Vegan Blend or Hemp Protein.

Soups & Quiches – Daily specials on the blackboard. Quiches were vegetarian, at least one soup was vegan.

Baked Goods – Changes daily. When we visited, they had Chocolate Mint Layer Cake, Carrot Cake, Pumpkin Muffins, Berry Scones, and Apple Pie. All were vegan, and all but the apple pie was gluten-free. Prices range from $3.75 for a muffin to $5.95 for a cake slice. You can also order dairy-free vanilla ice cream to go with your cake or pie.

After a wait for our food (long compared to most fast-casual restaurants; short compared to a sit-down restaurant), we looked about for a place to sit.  I’d noticed an outdoor seating area when we drove up, but was unsure whether it belonged to Bay Naturals or if there was another restaurant located just behind. (Especially since no one seemed to be taking their food out there!)

Turns out it was a gorgeous covered patio, complete with heat lamp and gas fireplace – and it WAS part of Bay Naturals! 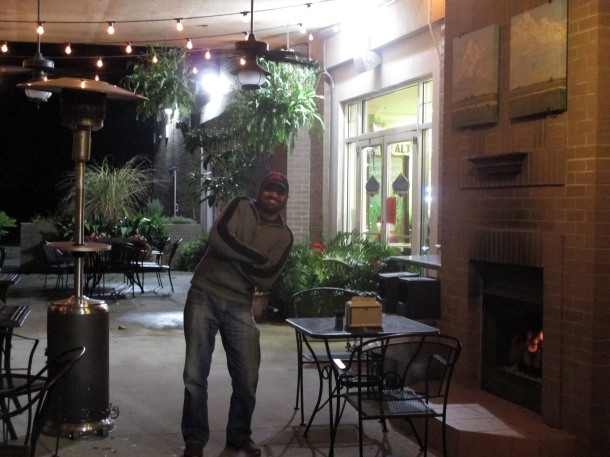 Who IS this joker? And why does he photobomb all my pictures?

I chose the table next to the fireplace, of course. 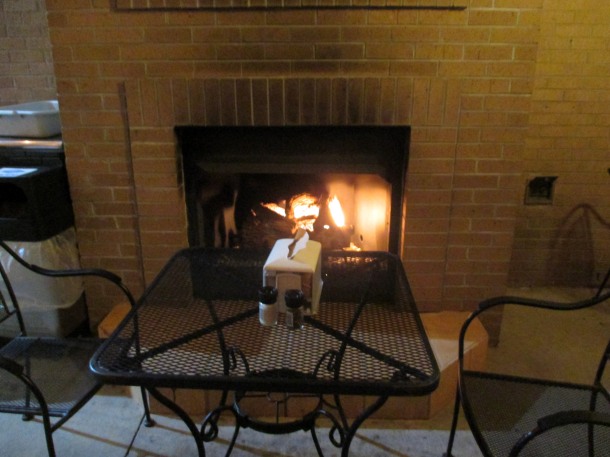 We sat down to eat and we were STARVING. So much so that my partner had ordered two entrees … a vegan hot dog with house made sauerkraut (you could also get it with relish). He chose red bliss potato salad as his side … excellent. 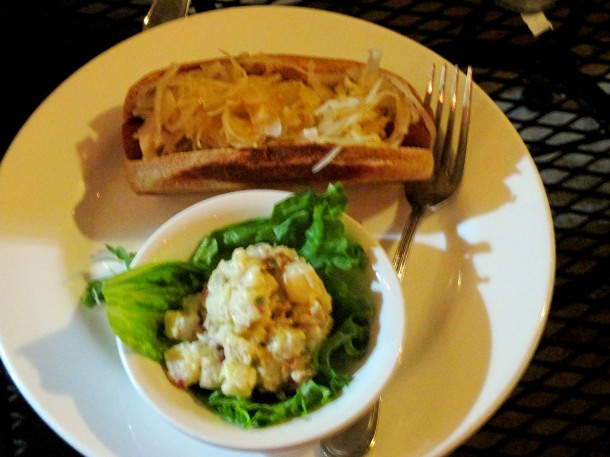 He also ordered a Fakin’ Bacon BLT. He thought it needed a little more salt to taste like bacon, but that was easily remedied. The tomato was ripe and the lettuce fresh and crispy – ya’ll know that’s a rarity these days. 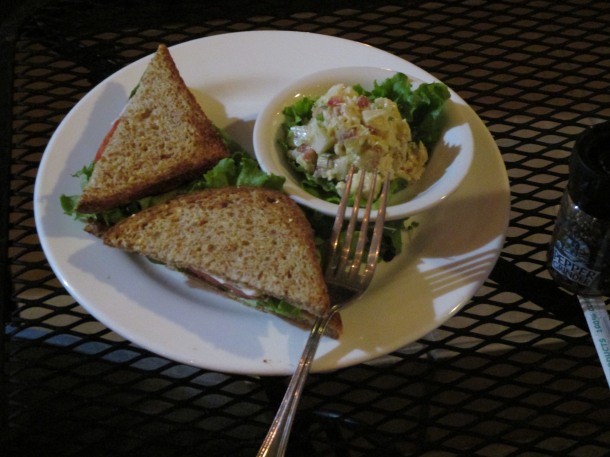 I ordered a Spinach Cheese Quesadilla, which came with three “dipping sauces” – black bean, tomato salsa, and mango salsa. This was easily the best vegan quesadilla I’ve ever had. 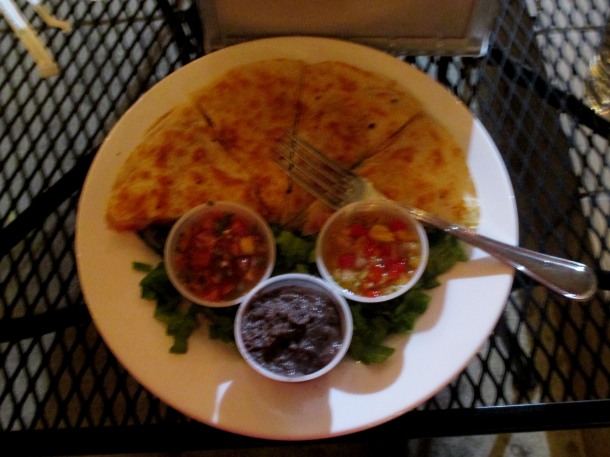 Bay Naturals also has a breakfast menu. Unfortunately our schedules never permitted us to try this.

The kitchen closes one hour before the market.