Zada Jane’s Corner Cafe (located in a former dry cleaners on Central Avenue in Charlotte, NC) is one of those bright, funky, Southern-style, breakfast-all-day places, similar to The Flying Biscuit or Tupelo Honey.

Similar, but not the same.

Zada Janes has far, far more vegetarian and vegan offerings than the Charlotte Tupelo Honey.  In fact, Zada Jane’s proudly proclaims their menu to be “half vegetarian, half meaty.”  Further, they have two separate grills for the meats and veggies, and since the kitchen doesn’t have a fryer you don’t have to worry about cross-contamination via cooking oil.

And, while Zada Jane’s claims to be, above all, a “family and community-friendly restaurant,” it’s much more “adult” than The Flying Biscuit. (In other words, you’re less likely to have a screaming 6-year-old sitting at the table behind you.)  A barista makes custom fair-trade coffees and teas, and there’s a small bar and healthy “happy hour.”

As for the food … Zada Jane’s menu is, indeed, half vegetarian.  There’s plenty for the octo- or lacto-vegetarian to enjoy, ranging from soups, salads, and sandwiches to eggs, omelettes, pancakes, and French toast – plain or Amaretto.  At night, they also have a Wild Mushroom Ravioli entree and a couple of vegetarian appetizers, such as 3 Cheese Spinach Artichoke Dip and Veggie Quesadillas. 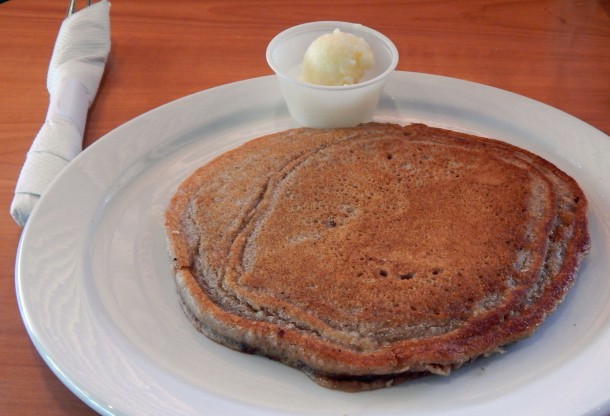 There’s plenty of breakfast foods for the vegetarian who eats eggs and/or dairy!

For vegans – at first glance, there appears to be far less choice, but actually we do have a few options, especially if you read their menu carefully and use a little creativity!

(And I do recommend reading their menu carefully; it’s very detailed and answers many of the questions you might have.  For example, it states the Franz Kofta Veggie is “lightly bound with egg and breadcrumbs,” so you know right away it’s not vegan.  No waiting while the waitress checks with the manager or cook!)

Soup:  Heart Warming Zada Jane Vegan Soup.  It’s a vegetable soup, given a slight edginess by use of curry powder.  The curry powder turns the soup a rather muddy, murky color but don’t worry – it tastes better than it looks.

The Green Mindmelt.  An oven roasted portabella cap topped with zucchini, yellow squash, spinach, and tomatoes served on foccacia with a side of Peppery Vinaigrette dressing to drizzle over the veggies.  The vinaigrette is so good there’s no need for the mozzarella cheese this sandwich is usually topped with.  Fresh and zesty, this sandwich is one of my favorites.

Kool Kip’s Nachos.  These are nachos with a lot going on – blue corn chips topped with grilled veggies (yellow squash and zucchini), black beans, roasted corn, lettuce, guacamole, and housemade salsa.  The only thing you’ll be missing by ordering these nachos sans queso and sour cream is fat and calories.

Hummus Frummus Wrap.  I’ve not ordered this yet – because I hate spending money on hummus in restaurants when it’s so quick, easy, and inexpensive to whip up my own batch of hummus and make a wrap at home.  However, I’ve heard Zada Jane’s hummus is outstanding – and it’s roasted red pepper hummus, not plain.

Salads (Duh!): I know, I know.  It’s what vegans are always relegated to eating at a restaurant … salad.  However, there are a few good things to be said about Zada Jane salads:

(1) Salads are generously sized with lots of toppings.  In other words, you really CAN make a meal of them.

(2) Most salads can successfully be veganized.  I know, I know … all restaurants say, “You can modify any of our salads to be vegan!” and that’s true.  However, often by the time you leave off the cheese, the hardboiled egg, the bacon bits, the croutons, and the dairy based salad dressing …. you’re left with some spinach leaves, three cherry tomatoes, and a little oil and vinegar.  But at Zada Janes, you can order the No-Da Salad, ask them to leave off the boiled egg and cheese, and still be left with baked marinated tofu, artichoke hearts, roasted corn, sunflower seeds, sprouts, and tomatoes.  Or you could order the Chop Salad, ask that the feta cheese and parmesan croutons be eliminated, and wind up with broccoli, carrots, garbanzo beans, roasted corn, tomatoes, mushrooms, and sprouts.

(3) You have the option of adding baked tofu to salads.

(5) And, finally, there is the Hummus Frummus Salad, which I wish I’d had the courage to photograph.  (The salad was being eaten by a stranger who seemed to be in a rather dour mood, and she’d already been looking askance at me and my Nikon.)  The salad was HUGE.  One side of a very large plate was covered by salad – spring mix with roasted red peppers, cucumbers, tomatoes, shaved carrots, and toasted walnuts.  The other side of the plate had a bowl of roasted red pepper hummus, a bowl of tabuleh, and a fan of pita wedges.

Most of the lunchtime side items are vegan – including the excellent Herb Roasted Potatoes and incredibly fresh tasting Black Eyed Pea Salad.  Other options include Kettle Chips, blue corn chips, daily greens, a small house salad, or a fruit cup.

Breakfast.   Here, options get a little slimmer.  The easiest choices for the hectic breakfast/brunch times would be:

East-Western Tofu Scramble.  Organic tofu with mushrooms, green peas, fresh spinach, tomatoes, and caramelized onions.  My partner was disappointed in this menu item because he thought it would be more of a traditional style Indian scrambled tofu or tofu bhurji. Instead, it was seasoned with yellow curry powder (a British invention).  My American friends like this scramble, though.

Organic Greens Breakfast Salad.  Order it with organic marinated tofu instead of smoked applewood bacon and tell them to leave off the “happy egg.”  You’ll wind up with organic greens, marinated tofu, herb roasted potatoes, and tomatoes, topped with a sun dried basil vinaigrette.  Similar to The Flying Biscuit’s Tofu and Tater Salad, but – dare I say? – better?  Yes, I do dare.

If you’re dining during a less busy time, you could also request a custom tofu scramble (not on the menu, but several of my friends have done it).  Pick your veggies and toppings from the Build Your Own Omelet menu.  Although theoretically this should not be difficult for the restaurant to do, it is asking a rather large favor during Zada Jane’s super-busy times so try this at weekday lunch, not their weekend breakfast/brunch hours.

Dinner.   Sadly, the dinner menu offers no new vegan entrees.  It’s also (at least as far as vegans go) a bit more limited, so if you want to check out Zada Jane’s, in my humble opinion lunchtime is best.

A Note About Lines, Seating, And Service

Zada Jane’s, like every other restaurant out there that serves breakfast/brunch (IHOP, Original House of Pancakes, Tupelo Honey, Flying Biscuit), is EXTREMELY busy on Saturday and Sunday mornings.  Lines can be long, waits can be long, staff can be stressed, and parking can be scarce.  Please park legally – the area has been known to boot and/or tow.  Recognize that you may have to wait – for a table, for service. Recognize the servers and cooks may be doing the best they can.  Recognize that Zada Jane’s can probably handle easy modifications – like leaving cheese off a Green Mindmelt – but now is not the best time to request complicated substitutions/alterations.  Recognize your experience on a Saturday or Sunday morning will be very different from your experience the rest of the week. I’ve mostly visited Zada Jane’s for lunch, and have found their service to be very competent – nothing to brag about but certainly nothing to complain about, either.  For best service, obviously visit for lunch or dinner.

Updated 8/2/2104 – I finally tried the Hummus Frummus.  It’s good, but as you can tell by the picture, the tabouleh is a bit Americanized, as was the mild and non-garlicky hummus.  Good if you have a mild palate, but if you’re expecting traditional hummus and toubeleh salad like you’d get at the nearby Kabob Grill, you’ll be disappointed.  It’s certainly plenty to eat, though.